As the queue to the only Scottish date of Touche Amore‘s tour stretched around onto Union Street, it was obvious that tonight’s gig was going to be pretty special. Taking place at the intimate and claustrophobic Stereo venue, which in itself is a total juxtaposition of the lovely and well-kempt vegan cafe above, this show couldn’t have taken place anywhere else other than here.

Starting off with some homegrown talent in the form of Departures, tonight’s events were kicked off in the most appropriate way possible with a display of wonderful hardcore performances. The Glasgow guys were fairly modest as well, noting the sold out gig and saying:

There’s a lot of ye, thanks for turning up early. If you were going to turn up early anyway then sorry.

The self-professed “Scottish idiots with no gear” all seemed to be in one telepathic flow as front-man James McKean maneuvered the stage effortlessly, manage to intertwine amongst Daniel Nash, Pierre Charlesworth, Andrew Traynor and their multiple cables. 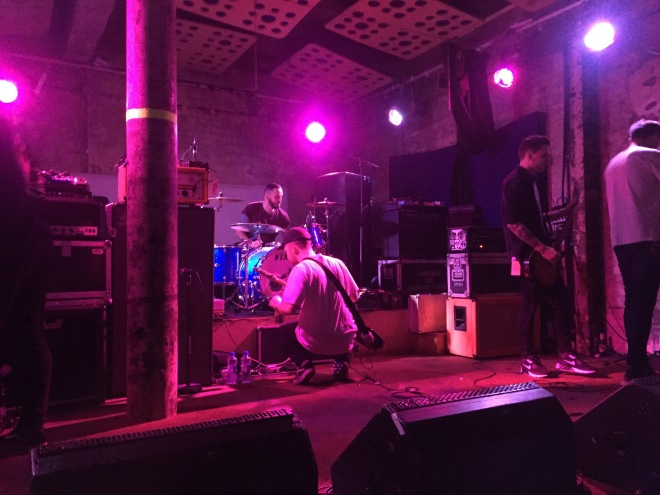 This was pretty poetic considering how easily McKean’s voice traversed through the layered instrumentals, all of which helped to present the band’s unique blend of passionate modern hardcore music with Making Maps being a particular highlight, showcasing the emotive and heartfelt lyrics Departures do so well. (On a quick side-note, Alistair Morrison may be the happiest band member I’ve seen perform live since Frank Turner: what a man).

Up next were Baltimore hardcore act ANGEL DU$T who were starkly different from the preceding support act with their “go hard or go home” attitude being an utter delight from start to finish. Manifesting all the traits of similar hardcore bands such as Turnstile, frontman Justice Tripp wasn’t lying when he said that they’d be performing some short and hard songs: the riffs came thick and fast like you had just been dropped kicked onto a motorway during rush hour and every second was absolutely exhilarating.

The crowd seemed to be utterly enthralled by the whole performance. As Tripp held the mic above himself WWE style while simultaneously putting his hand on his hip like a more intimidating teapot, you would regularly see fans jump on stage and nearly instantly forward or backflip right back off. At one point a rather psyched man jumped on top of the nearby amp and proceeded to crowd surf for about 3 yards before hitting the ground: you really couldn’t ask for anything more appropriate than ANGEL DU$T to be playing while this happened.

Then the real meat (or Quorn) and potatoes of tonight’s meal arrived . Touche Amore have solidified themselves as one of music’s most valuable acts with a golden run records wise and as they appeared on stage, the crowd was erupting to put it lightly. Flowers And You off of the band’s latest LP Stage Four began the Californian’s passionate proceedings with Jeremy Bolm’s hoarse screams acting as emotional expulsion, shaking the room with instrumental and emotional intensity. While it’s no real surprise that a tour that is supporting an album revolving around grief brought with it some sombre moments, Touche Amore really raised the bar when it comes to this realm: some tracks such as Displacement were gut wrenching anthems that had the crowd simultaneously rag dolling around the tightly packed venue while fighting back the tears.

It wasn’t just the crowd that were wearing their hearts on their sleeves. Bolm himself professed his love for the city of Glasgow, confidently saying:

Having a Belle and Sebastian tattoo, it feels awesome to walk the streets where this music comes from and to have this be our first sold out gig means a lot. We’ve played here multiple times and it’s always great.

To put it simply, Touche’s set was an intense tour de force, providing all of the feverous lyrics and straight-up fierce passion the band has for their art. As they ended their gig with a cut off Is Survived By, it was safe to say the band ended the night perfectly and sent everyone home with memories of what is sure to be one of the greatest gigs anyone in attendance will ever experience.