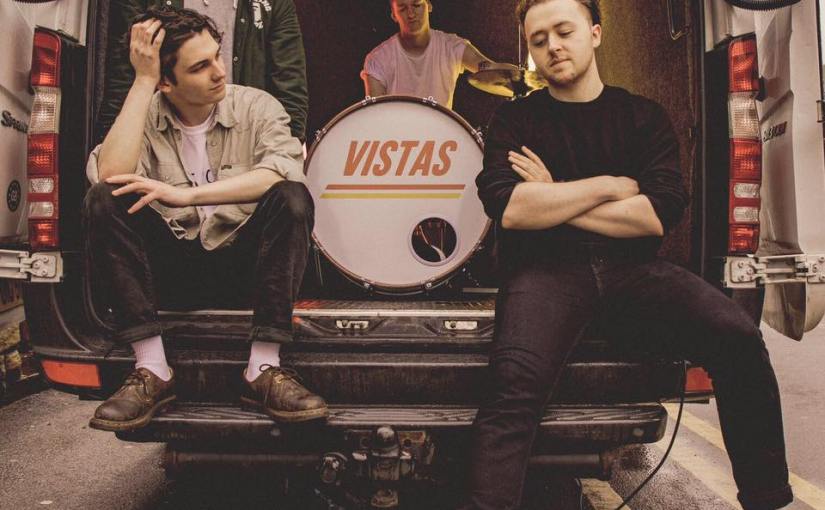 It’s a sunburn inducingly warm day in Glasgow and already you’re probably asking yourself “is this interview lying before it’s even started” but no, it really was one of those special afternoons where the weather wasn’t as bleak as most of the general public were. Sitting (well standing, the tables turned and I was put in the hot seat) out behind the rubble littered back streets behind the iconic King Tuts venue, Prentice (vocals + guitar), Jamie (bass) and Dylan (guitar) of Vistas all crowd around the touring minivan, their soon to be humble abode when the boys set off a UK tour later this year.

The prospect of a UK tour probably seemed like a faint glimmer in the band’s eye when things started off back in 2016 but two years later and the Edinburgh based band have found themselves excessively trailing over the country, accumulating millions of streams on Spotify and rubbing shoulders with inspirations like Circa Waves and The Magic Gang. Their brand of indie pop tunes, having started off more in the rock side of things, has obviously struck a chord with fans who have stood by them as they’ve further tinkered with it. According to Prentice, fans can expect a new EP in “September, October-ish” which they feel will be more of a new chapter for the band compared to their first one Medicine.

When it comes to prodding about the long-anticipated debut record, the answer is a bit murkier, Prentice simply saying that the band doesn’t want to force things out until they feel more comfortable. “We’re a very cautious band and we don’t want to do too much too soon before we’re ready and we get asked quite a lot when that album is coming out but admittedly we’re not prepared to do it“, going on to say how excessive touring can throw a further spanner in the works.

On that touring note, the boys aren’t taking things lightly; “We’re set to do around about 24 shows in the space of 30 days, give or take” Jamie states, teasing that there are quite a few to be announced though goes on to clarify how fatigued the experience can be. “When we did our first UK tour with touts, we were away from home for a month and looking back it wasn’t all that bad. Compared to our last two shows in London, we were absolutely done in from it” though Prentice builds on that by saying the horrible heat hasn’t helped matters which is probably for the best considering the energy of a Vistas show is a huge drawing in factor, both in the fans’ view and the band’s.

“We’ve come on quite a bit the past six months but I think the fact we care so much gives us that edge, especially when we’re aware that people are spending £8-10 that they could spend elsewhere” Prentice chimes. Dylan chips in to say that while there is definitely that element to it, the band themselves have so much that they make the trip that people venture on to see them worth it, Jamie mentioning how many are off to see them tonight from Edinburgh where that journey can last twice as long as their set.

As the interview draws to a close, and Graham (drums) appears, no doubt from the drawn-out soundcheck that had happened prior to this, I wish the band luck on their performance tonight though I could have done the complete opposite and they would still have a successful night: photos from the Tuts gig flood into my social media feeds, the venue looks packed to the brim as the gratitude of the members are unashamedly painted on their faces. It’s easy to fawn over the popularity of Vistas but what’s worth mentioning is the sheer down to earth attitude that only goes to add to their likability: millions of listeners could easily fill up an ego but all that extra air has gone straight to their lungs so they can keep that consistent quality more than steady.