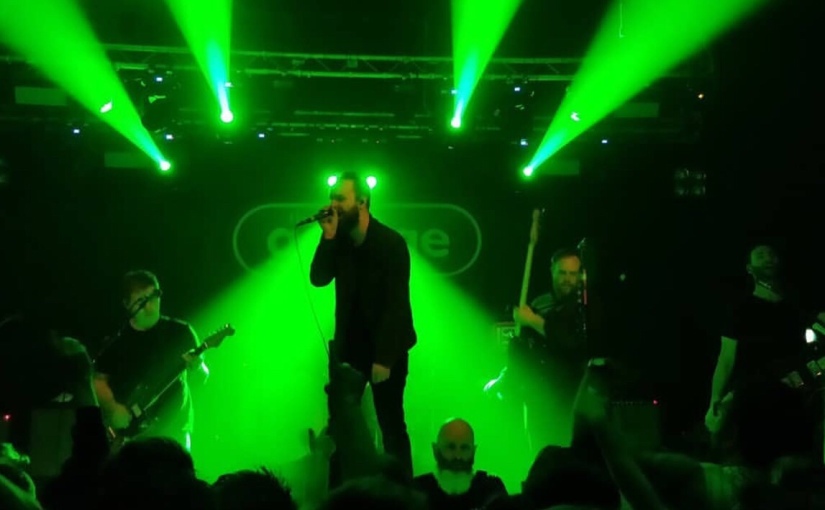 Following the release of their beautiful album, sister cities, Philadelphia rockers The Wonder Years brought the UK leg of their tour to the Glasgow Garage.

Opening the evening was singer songwriter AW. They opened without introducing themselves, but were quickly distracted as the crowd clapped along to the beat. “I wanted to do it all cool up here, like a rockstar who doesn’t say who they are but you fuckers clapping has put me off!” It was an hilarious moment, sending laughter throughout the room.

The sad and relatable nature of AWs songs really made them one to remember. Feelings of love and rejection were apparent throughout and really hit on those emotions that people sometimes find hard to convey.

It was time for the first of two sets from the healdiners The Wonder Years. First up was an acoustic set, tearing apart some of their most popular songs and giving them a whole new feel. Classic pop punk song Don’t Let Me Cave In felt even better acoustic. Being able to tear apart the lyrics and think of the song differently was really unique.

As well as playing songs slowed down, the rockers also played some of their classic acoustic songs. Living Room Song went down beautifully with the Glasgow crowd. Everyone clapping and singing along to the tune of the song had front man Dan Campbell on his feet and clapping away. As the band closed the first set with No Closer To Heaven, it was a unique and fun way to get the fans ready for what was sure to be a fast paced set.

Coming back on stage the band were ready to do what the wonder years do best, have fun. Opening with new track Pyramids Of Salt, before powering into I Don’t Like Who I Was Then and Thanks For The Ride, it was the perfect three songs to open up the set. The anthemic nature of these songs had the crowd screaming along to the choruses and the whole room felt connected.

Classic songs such as Came Out Swingin’ really went down well, with the smiles and expressions on the bands faces really showed how well the night was going. Perhaps the bands best song live, Devil In My Bloodstream, was next and it felt beautiful. Going from the slow piano ballad into the pop punk masterpiece it is was sublime to hear, and had everyone feeling emotional.

The end of the set featured classics such as Cardinals and Passing Through A Screen Door before closing the evening with Cigarettes & Saints. Tonight felt special, every act put their heart and soul into making it feel special. Not one person left the garage without a smile on their face, and it truly shows that despite some arsehole bands ruining our scene, alt music is still alive and well.