Hot on the heels of their ferocious debut album, Songs Of Praise, Shame have embarked on a tour of some of the UK’s most intimate venues. Last night (12th April) Shame arrived in Glasgow and encountered a crowd that anticipated an electric live show that would match the energy of their debut album, and the London band delivered on these expectations and then some.

From the outset, frontman Charlie Steen made himself impossible to ignore. It’s impressive how at home he seems on the stage at such a young age and at this point in the band’s career. Immediately he strikes up a casual conversation with the crowd, dropping spontaneous jokes about how they are a “Christian band.” Beckoning the crowd to come closer to the stage, Steen leads the band into set and album opener Dust On Trial, the atmosphere becoming undeniably ecstatic. 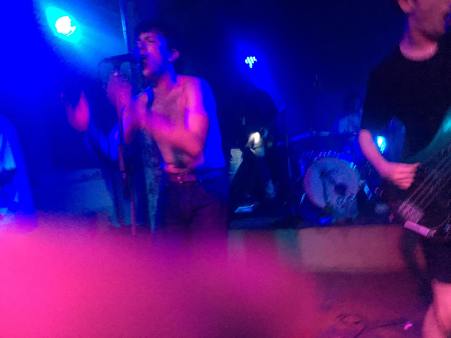 Shame and Stereo are a match made in heaven: Shame’s post-punk grit along with their massive hooks and melodies sound both raw and crisp in such a small venue. Stereo is renowned for being a great venue and one reason for this is the sound is always sublime and Shame go along with this environment perfectly. It’s almost sad that Shame are already booked to play the much bigger O2 ABC later in the year as the band’s presence suits the intimacy of Stereo perfectly.

The band themselves seemed to thrive off the energy of the night, Steen in particular growing more and more confident with each song not that he even needed the boost. Standing on the edge of the stage conducting the crowd with a wave of his arms, before long he had his audience entranced watching his every move in anticipation of what he would do next. Pouring beer over our faces, grabbing at fans’ outstretched hands, Steen lives for interaction with the audience and it amounts to making him one of the most exciting frontmen working today.

On top of all the showboating, Shame have ounces of substance to back it up. Each song from their debut sounds even angrier and passionate in the live setting. From the dark, menacing manner of The Lick to massive anthem One Rizla, Shame adapt with ease turning each song into a reason for the crowd to lose themselves in the moment. Steen introduces each song with casual interludes, including a reassurance that he now believes other bands when they say Glasgow is always the best tour date. By midway through the set Steen is talking to his audience like they are old friends and it leads to a magic gig that was deserved due to the band giving their all.

Shame finish their set with a triumphant rendition of Gold Hole and as it comes to an end, Steen ascends the 10-foot tall amp and dives off into the crowd, which was strangely unsurprising considering the showmanship he had demonstrated throughout. Completely winning over Glasgow with their bravado and infectious sound, Shame put on one of the best live shows around: it’s no surprise this band is going places.