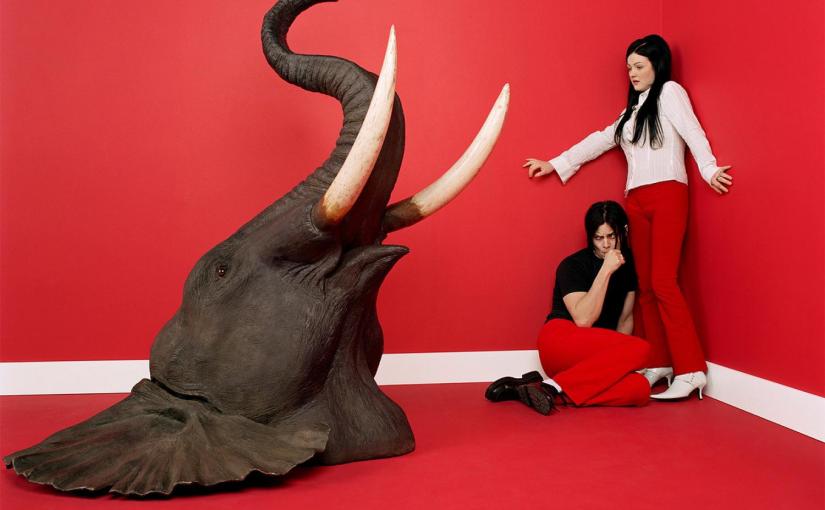 Fifteen years ago, Jack and Meg White released their fourth album, Elephant. Far from an April Fools prank, the album thrusted the former spouses/ fake siblings into stardom and considering the impact it had on the rest of the decade and the paths Jack and Meg are currently on, it is worth revisiting the album on its birthday.

In 2003, there was no shortage of rock bands (Radiohead, The Strokes, and Muse all at the height of their popularity) but beforehand, The White Stripes were still relatively off the radar. Coming off from White Blood Cells in 2001, they had garnered critical acclaim, especially for the perfection of garage rock demonstrated on that album. However, their fourth album Elephant would turn out to be their pivotal moment, where everyone started to take notice of the Detroit duo.

Even listening over a decade later, from the first few seconds of album opener and lead single Seven Nation Army, it’s easy to see how the album had the impact it did. Today, it’s one of those incredibly famous songs that everyone knows even if they don’t even know where it came from or who made it: everyone recognises that iconic riff that influenced so many bands of the noughties and you can probably hear it in your head as you read this. Seven Nation Army finds the band already silencing the few naysayers who felt their approach was formulaic and limited; Jack’s use of a guitar pedal causes his guitar to mimic a bass and showed that they were not scared to innovate despite their sound often being nostalgic of eras past.

Beginning an album with such an achievement is a risky move, as it could overwhelm the rest of the runtime, however the raw aggression of Seven Nation Army feeds straight into Black Math, their heaviest and grittiest offering at that point. Showcasing Jack’s vocal ability, the track sees him follow the rollercoaster ride nature of the songs flow with ease as he snarls lyrics about his refusal to be taught anymore, taking control for himself.

The hot streak continues into the next few tracks – The White Stripes still sound so enthusiastic and ambitious on Elephant even today, from Jack’s cutting lyrics and delivery to Meg’s skills on the drums, which despite her critics, are crucial to the album’s atmosphere. Another highlight is a cover of Dusty Springfield’s I Just Don’t Know What To Do With Myself, a clever reworking that creates a catchy yet explosive pop-rock track.

Insistent on proving their versatility, Meg takes a rare turn in the spotlight for In the Cold, Cold Night, which is also a musical change of pace from what precedes it. A tense and eerie track that still manages to have a sense of charm to it, Meg’s vocals add continued variation and unpredictability to Elephant. Following on is I Want to be The Boy.. which has clear influences from country music and continues the lyrical theme of the album, Jack’s yearning to be a chauvinistic gentleman. Again, You’ve Got Her in Your Pocket finishes up the relatively mellow portion of the album, accompanied by a gentle melody, Jack delivers the songs fragile lyrics that possibly tell of his own relationship with bandmate and ex-wife Meg White, as it’s a song he had performed live years prior to its eventual inclusion on Elephant.

Roughly halfway through the album, Ball and Biscuit is the band’s longest song, yet one of their most impressive. Featuring another signature riff, Jack changes up his vocal style again, almost speaking the words as his guitar rhythm is the star of the show, constantly shifting predictability for over seven minutes. At this point in the album, Elephant has already defied expectations and the duo are just showing off.

Another anthemic single, The Hardest Button To Button again showcases the White Stripes’ knack for catchy melodies, sounding ferocious and infectious simultaneously. Jack’s skill for storytelling is also at the fore, telling of his experience growing up in a turbulent family home, his word choice often being dark yet subtle. Refusing to let up steam, Little Acorns and Hypnotise both contain the album’s raw power, the latter being reminiscent of the shorter cuts found on their previous albums.

Another impressive factor to Elephant is how seamlessly the runtime flows, Jack and Meg seeming more powerful and invigorated with each track, right through to Girl, You Have No Faith In Medicine, another call back to albums past. Their classic garage rock sound is this time surrounded by their newfound sense of significance, making this track and everything before it feel so much more assured and confident.

The album closes out on yet another twist, almost a conversation between the band and Holly Golightly on love and friendship. An endearing closer that perhaps alludes to how impressive the album that leads into it was with Holly and Jack’s exchange at the end of the song where they celebrate the success of the track.

Looking back, Elephant is a massive album in every sense. Musically it encapsulates everything the band was capable of and proved their ability to innovate on the genre they helped revive. Commercially, it made the band famous worldwide and Jack White remains a respected figure even today. Considering Meg’s consistent tendency to shy from the spotlight and reclusiveness since the band’s split, many fans may think the band’s fame was accidental, that Elephant was a lucky break, an accidental crossover hit. For me though, Jack knew exactly what he was doing.

On the album’s follow-up Get Behind Me Satan, Jack admits on White Moon that his yearning for success and fame got in the way of his relationship with Meg. A man of his talent and ability must have known just how special Elephant was and how it would essentially seal the end of any possibility of reconciling with Meg, which perhaps makes the success bittersweet. Nonetheless, Elephant will always be what both Meg and Jack are remembered for and it will continue to be a staple of popular music for decades and is always worth revisiting to appreciate just how special it is.

One thought on “Looking Back At…Elephant by The White Stripes”