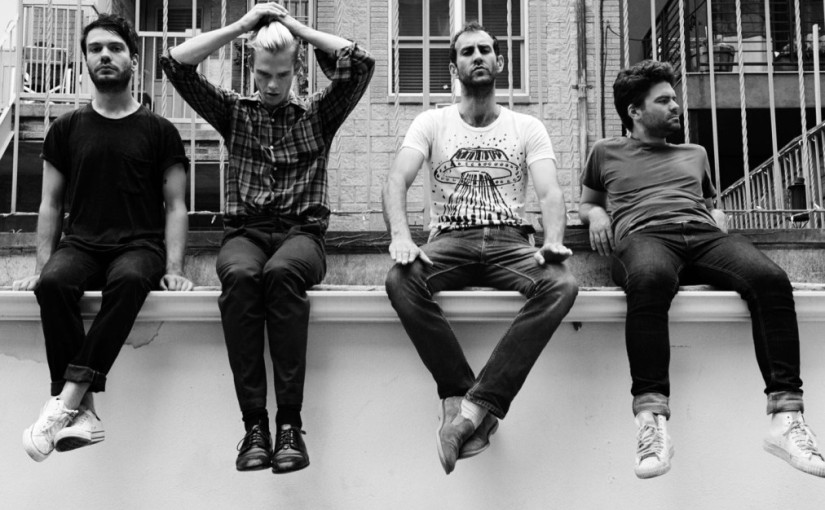 On first impressions, it’s difficult to deny that Preoccupations aren’t particularly creative when it comes to dreaming up album names – after all, their first two full-length records are self-titled. Back when they recorded under the Viet Cong alias, their eponymous debut Viet Cong – while critically acclaimed – courted fairly significant controversy due to its historical and political connotations. After it became abundantly clear their band name was no longer tenable, the group mulled over a new name for several months before announcing they’d henceforth be known as Preoccupations. The album to usher in this new era for the group? Er… Preoccupations.

There’s beauty in simplicity, though. Just as Preoccupations was, in fairness, the perfect descriptor for the compulsive, anxious mood of their sophomore album, New Material is a surprisingly apt title for their third and latest effort. Compared to the nervous energy and angular riffs of previous records, they’ve sanded down the sharp edges. The result? A much more accessible, more nuanced record which transports them further still from their noise rock roots without sacrificing any of their lyrical sincerity or expression.

Lead single Espionage kicks off proceedings with some familiar industrial noise; what follows, however, is much warmer and less abrasive than we’ve come to expect from the Canadian quartet, leaning more heavily towards synths instead of the characteristic razor-sharp stabs of guitar. Whereas before it felt like Matt Flegel’s vocals were screaming, arms outstretched against a tidal wave of sound, now he rides the wave in seemingly greater harmony. This frenzied approach undoubtedly worked a treat on previous recordings, but it seems they’ve now settled down into a more comfortable groove.

With each subsequent album, Preoccupations are undergoing a marked series of changes – some subtle, some more apparent. Despite this willingness to traverse new territory, they certainly don’t seem reluctant to pay homage to post-punk forebearers such as Wire and Joy Division, the latter in particular on tracks like Solace. There’s no mistaking that distinctive Unknown Pleasures-era snare drum sound or the ominous Peter Hook style bass lines, but by no means is this a knock-off, supermarket own brand version. They’re taking cues from classics of a bygone era and using them tastefully as part of their modern, progressive take on the genre, resulting in one the highlights of the album with the thrilling conclusion to Solace.

Since their inception, multi-instrumentalist producer extraordinaire Scott “Monty” Munro has devoted a great deal of effort to achieving a certain aesthetic, ultimately hoping to “make a record where nobody knows what instrument is playing ever,” unleashing the full firepower of his gadget arsenal to this end. With that goal in mind he has been largely successful in creating fascinating and unique soundscapes across the entire recording, ranging from the expansive to the claustrophobic. Very occasionally, though, the sheer wall of sound becomes overbearing; reverb-drenched vocals leave the otherwise punchy Disarray feeling a bit washed out and lacking in oomph. These moments are few and far between, however. By and large, it’s an extremely well-produced and cohesive record.

The topic of the band’s unceremonious rebranding presents a strange paradox – a singer whose lyrics are dystopian, introspective and very often cathartic but who (along with his fellow musicians) seems disinclined towards being taken too seriously or becoming too political. Recognising that perhaps their original choice was ill-judged in nature, the easiest course of action seemed to be a change of identity to prevent it overshadowing their music and distracting people from the real message they’re trying to convey. If that was the major transition between their first two albums, they’ve taken a step further with New Material. By doing away with the 12-minute behemoth tracks, they’ll undoubtedly win over yet more listeners who might’ve found the sheer graft involved with listening to songs like that offputting.

One thing is for certain, though. Preoccupations remain a hot prospect for the future and it’ll be intriguing to see how they continue to forge their own path among their modern post-punk contemporaries. They’re tantalisingly close to greatness and, if we’re all lucky, their pioneering nature will hopefully see them reach those heights with subsequent releases.