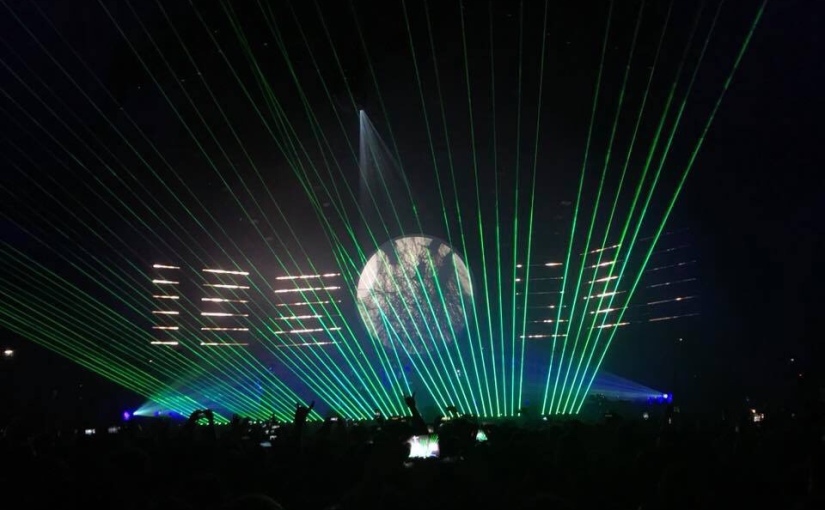 Without eulogising too much, a year ago, I saw Black Sabbath bring down the curtain on their near fifty-year career, after being the very genesis of heavy metal. Thousands of bands had been directly or indirectly influenced by their sound, but it made me wonder; who’ll be the torchbearers for British heavy metal from then on?

As Architects burst into A Match Made in Heaven to open their sell-out, headline show at Alexandra Palace, it was pretty evident that the torch was squarely within their hands as ten thousand people started to rattle the legendary venue to the ground. It wasn’t an easy ride to get here for Architects, but seven albums and over ten years after their journey began, this was their rightful place.

Frontman Sam Carter couldn’t believe his eyes as he gazed out from the front of the crowd to the back, as thousands of sweaty limbs bashed against each other, like some kind of heavy metal chemical reaction to a mix of old and new tracks including Downfall, Naysayer and Deathwish. This, again, is another eulogy but he’s one of my favourite frontmen. Doesn’t look like a heavy metal guy, looks like your friendly mate, and spent a good portion of time talking to the crowd about calling out & stopping hate in all forms, not wishing you were the person that did something, but be the person that did something, and letting everyone know that an Architects gig is a safe space. Not only are they carrying the torch of heavy metal, Jeremy Corbyn’s favourite metalcore band is also helping to carry the torch of safe gigs for all.

I’ve been recovering from some kind of flu recently, so after blowing my arse out during While She Sleeps, I wasn’t much in the mood for moshing, but the pitting was good, of a good consistency, people looking out for each other, no dickheading about. We’ve spoken about moshpits a lot in these reviews, and these pits were the best I’ve experienced in a while. Apart from The Devil Is Near, where the entirety of Ally Pally opened, and at that point, you’ve gotta say “fuck this, I’m not ready to die“. However, through and through, it was the gold standard of mosh pitting. Ally Pally, I salute you.

The production value of this gig was incredible too; the stage set up was really nice, with lasers cutting through the audience and pyro keeping an already sweaty crowd nice and warm. They also didn’t look out of place on that stage either, every inch was covered by the band, and at no point did they look out of their depth. They just needed the opportunity to take their show to the big stage, and they absolutely destroyed it.

It was good to see tracks off Daybreaker make an appearance as well, with Alpha Omega, These Colours Don’t Run and Black Blood showing up. Daybreaker was the first Architects album I listened to, so to see them play their biggest ever show with those songs was pretty damn special. It would have been great to see some earlier stuff on the setlist, but when you’ve got 16 songs and some of your best work in the last three albums, space for big hits is at a premium. But if someone offers you the choice cuts of All Our Gods Have Abandoned Us, Lost Forever // Lost Together and Daybreaker, well fuck, you roll up your sleeves and get busy to Gravedigger.

It was also good to see Doomsday played live, which the crowd, despite being worse for wear given the huge buffet of bangers before, gave their full attention to.

There was also no doubt that the night was going to be full of mixed emotions for everyone, as whilst Architects had made it to their biggest show ever, the person who laid the groundwork and helped drive the band towards this point wouldn’t be there. Paying tribute to Tom Searle, who sadly passed away in 2016, twin brother Dan Searle spoke about how he imagined the two of them stood backstage, getting ready to go on. It was incredibly sad, but the deafening cheers and chants of Tom’s name just went to show how loved he was, and that despite not being there in person, his legacy, his riffs and his lyrics were there for everyone to enjoy.

With that in mind, all ten thousand put all their energy into the last two songs, Nihilist and Gone With The Wind, giving every last drop, with the band doubling that effort. As the last bars of Gone With the Wind rang out, a heart appeared on screen with T//S in it. Architects had, and have made it, with Tom’s legacy bound to live on through their old songs and their new songs.