Oh King Tuts, how I’ve missed you. Much like a busy father who doesn’t get to attend his son’s football games, I don’t get to see you as much as I’d like to but when we get the time to bond, usually every New Year’s Revolution, you never fail to make me proud.

Tonight’s proceedings weren’t any different and whilst mother nature wasn’t helping matters, meaning I had to leave prior to headlining act Voodoos, people were still coming in droves for tonight’s rock-fuelled venture.

Just as their name implied, this Glasgow rock outfit were in their zone with some predatory build up before they pounced on the chorus, resulting in a wild intro track that made an immediate impression.

You could smell the influences off the band from a mile away but this wasn’t a detriment by any means: front-man Rory radiated a Josh Homme aura, solidified with that open silky shirt, pendant and a bucket load of showmanship that resulted in a quality set that I wasn’t quite expecting.

It’s a cliche to mention the trials and tribulations of opening for a gig but when you’ve got the bravado that The Dead Coyotes have, there’s no need to worry about not having a good fucking time. 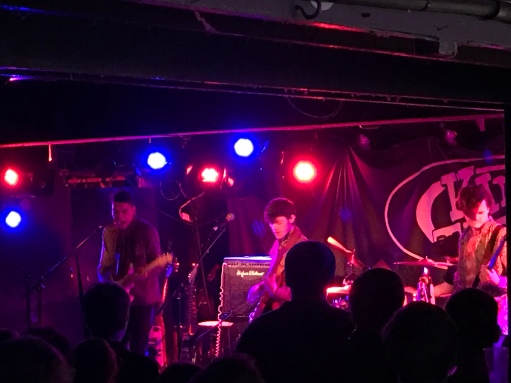 Much like the act prior, as well as the one succeeding them, The Good Arms are an act that are still in their youth: only starting off last year, the band has a debut EP under their belts as well as a previous appearance at the iconic Tuts venue so it’s no surprise that they accumulated quite the audience.

Thankfully, for both myself and those that had trekked through the snow, our enthusiasm was not misplaced as we were witnesses to a solid performance: cuts both old (if you can call them that) and new showed off a great deal of ferocity and chemistry amongst the tight rock unit. It’ll be exciting to see how they tweak their formula on future releases as the attitude on stage suggested they’re an act that are not willing to get complacent anytime soon.

To say that expectations were high for this Ayrshire groups Tuts comeback would be putting it lightly: having headlined this very venue less than a year ago, the band have undergone some serious changes that meant that despite losing a member and tracks in the process, they’re more than capable of adapting.

This brings us to The Mawb 2.0, a noticeably heavier band than what had come before which already gave them quite the edge. While it was never full on metal, it was hard not to be impressed by some of the guitar playing last night that gave it a different sort of flair to what we were used to – specifically Callum who was so confident on stage that he’s not against hopping off it to mingle and play amongst the crowd (even if he himself admits the smell he brought with him wasn’t as great as his riffing).

The rest of The Mawb squad were on tight form as well; despite the fact we could hardly see his face behind his hair, Ewan was impressing everyone with his vocals that, while not wanting to repeat a comparison I’ve made in this very review, were very reminiscent of Queens of the Stone Age. Paul on drum duties was as cool as a cucumber, at one point flat out playing without one of his sticks as if it wasn’t an inconvenience, and the same can be said about bassist Harry, the only man that can get a small chant going for him without saying a word.

If it weren’t abundantly clear at this point, The Mawb were cracking. It would be easy for them to continue on with the same sound they were going with prior but, taking the chance to try something new and push themselves creatively, the band showed that they’re not afraid to take a chance and won over fans both old and new tonight.

The boys are back in town.