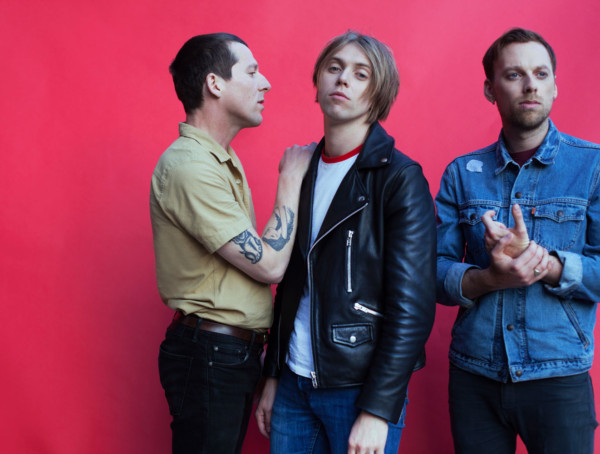 If you know The Xcerts, you know the band’s knack for catchy songs and a firm sound. Latest release Hold On To Your Heart shows not only a step up for the band but blends the sounds of pop and rock together. Innovative tweaking and huge arena rock blasts through the record, but the emotion factor that many adore the Aberdeen/Brighton three-piece for remains there.

Opener The Dark has a similar feel to 2014 track There Is Only You with the isolated piano and vocals of Murray Macleod, a man who remains to be in impressive form. The beauty this song radiates continues until the very end, closing with Macleod belting the lyrics “Tell me when the worst is over”. Going straight into one of our top picks of 2017, Daydream, we already have a feel for this album – the high-school love story vibes are totally intended and blur the lines between cheesy and anthemic, easily allowing the act to stand out in a genre that can be too afraid to let their hair down and get a bit nostalgic. Lead single Feels like Falling In Love is much the same, the funky riff and chorus providing smiles and dancey moments, while still not losing that much-needed rock aesthetic which gives the album its edge.

First Kiss is an unapologetic feel-good cut off the album, in a way that it perfectly suits the Aberdeen rock outfit. The buildup to the chorus each time never gets old, featuring the elements that will be sure to make it stick out and become a huge favourite for the fans. It’s at this point in the record that it becomes apparent that the last three and a bit years have been put to good use, the constant grafting and new organic way of songwriting providing some stellar results.

Continuing with huge riffs and that pop-rock feel, Crazy fits in with it all perfectly. Title track Hold On To Your Heart was released as the third single and feels like one of the most innovative cuts off the whole album. Much like First Kiss, Hold On To Your Heart retains that feel good factor while packing in a beautifully crafted guitar and bass beat that is a total head bop. The chorus feels absolutely colossal and it’ll be no surprise if you’re struggling to scrape it out your cranium once the album’s done – it’s the band’s best song to date and stands out enough on this album while not screwing with the overall cohesion of it.

As the album progresses, The XCERTS don’t wind down: Drive Me Wild incorporates some saxophone which adds to the variety without bordering on being gimmicky. The huge guitar and sax solos in this track are astounding, perfectly intertwining and showing off the band’s great attention to detail, down to the tiniest of sounds. We Are Gonna Live sounds more similar to something off one of the band’s earlier albums, with the catchy riff paired up well with a dancey little chorus. It doesn’t feel quite as fresh as the rest of the record, but this doesn’t take away from how good it is.

The final two tracks Show Me Beautiful and Cry are much more slowed down and, sadly, the former isn’t quite as strong as what has come before. Cry, on the other hand, is a piano lead song, similar to that of older XCERTS songs of the same nature. Utilising the immense vocals of frontman Murray Macleod, the ballad closes the album wonderfully though, clocking in at a strong five and a half minutes, it may come off as a bit stretched for some.

An album that has undoubtedly had time and care put into it, Hold On To Your Heart delivers some of The XCERTS best work to date. There’s a great deal of variety on display that helps it to stand out as their most polished and impressive work to date: it’s a natural progression for a band that has put the work in and are finally reaping the benefits of their graft.