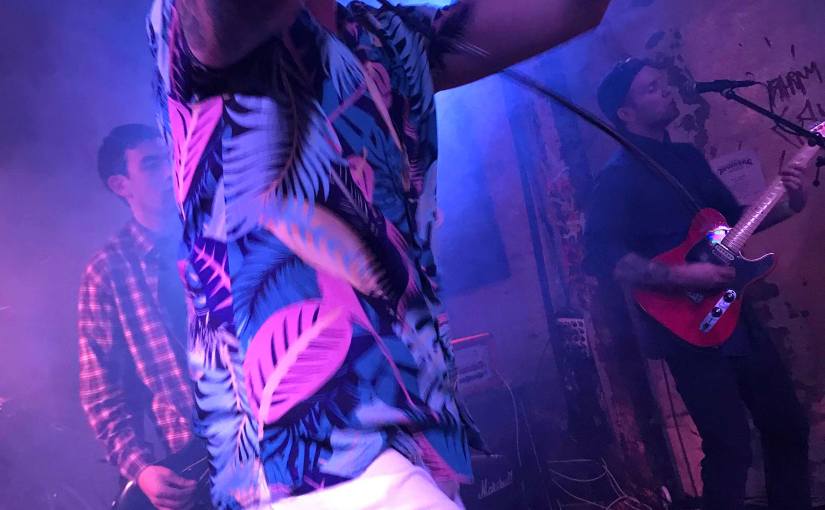 Love it or lump it, there’s no denying that pop punk is one of the most fun genres out there. Seaway hadn’t been over to Glasgow in a year so tonight felt like a kinda big deal. Bringing along three top-notch acts in the form of Remind Me Of Home, Lizzy Farrall, and Scotland’s pop-punk heavyweights, Woes, everything was in order for the night to be a rip-roaring success.

First on the bill was the local support Remind Me Of Home. Being hit with what is often regarded as the graveyard shift for gigs (15 mins after doors), it was amazing to see the number of people that had turned up early to catch the set. The young band did well enough to make an impression, making them an act that is definitely worth keeping an eye on in the future.

Lizzy Farrall was next, a different act to the rest of the bill, but certainly one of interest. Singing sad acoustic songs, the emotion captured on stage from the Manchester singer was something of beauty – truly a change of pace, it helped to keep the night varied but no less amazing.

It’s no secret that Woes have made an impression on pop-punk fans both in Scotland as well as the rest of the UK. Known for their lively shows and raw passion for what they do, the band put on a headline-worthy performance. New song Real World sparked mosh pits in the crowd and the cover of Last Resort went down a treat. Charismatic both on and off the stage, 2018 is going to be a colossal year for an act that truly deserves it.

After an exceptional bill, the crowd were 100% ready to see the headliner in Seaway. As soon as first song Best Mistake played, it unleashed what can only be described as utter mayhem throughout Stereo. Crowd surfs and stage dives galore, the set was a beautiful example of how fun the genre is. New songs London and Apartment proved to be just as good live as on record. Even playing older songs such as Your Best Friend and Shy Guys, the set tore the venue apart. Closing the set with the utterly beautiful Slam and Seaway classic Sabrina The Teenage Bitch, tonight’s gig was over.

While there’s no ignoring the bad stuff that is still prevalent in the genre, tonight served as a reminder of what pop-punk can achieve when it focusses on everyone having a good time. Fun as all hell, every act tonight put on an incredible show that was enough to reinforce why people who love pop-punk, well, love it.