Returning from a one year break, We Were Promised Jetpacks were set to finally play shows again, much to fans delight who have been eagerly anticipating their comeback. 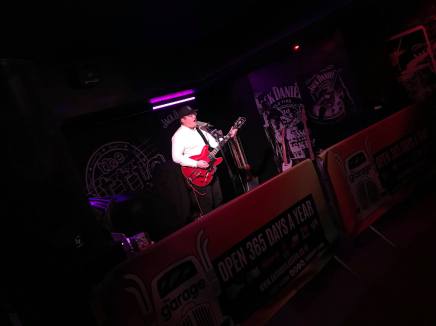 Set with the task of kicking off tonight’s proceedings was Fiskur, a young singer-songwriter who definitely left his mark: with a unique sound and impressing with various tracks, especially midway through the set, he’ll be one to keep your eye, or ears, out for in the future.

The headline act were finally on stage and they made sure to kick off in suitable style: We Were Promised Jetpacks opened their set with a new song, a slow starter into that huge instrumentation the band are known for. The theme of playing new material continued for around 5 songs, with every sound sounding fresh, yet still sticking to the roots of why Jetpacks are such a powerhouse.

Finally, however, the band played some older stuff. The huge Sore Thumb rocketed through the tiny room, and the raw emotion from the frontman was seen as well as felt. Fan favourite Human Error felt something special, perhaps because it was the first time in the set the fans could let themselves go a bit. It has to be said though that only time will tell if the new material the band played will become staples of future sets.

The band played more new tracks, perhaps too many for a headline gig: the gig almost felt like a practice session that fans could sit in on as there wasn’t really any crowd reaction unless they played older songs, of which there were only a handful of. When they did play some old tunes, however, the crowd were ecstatic: as soon as the drums built up into the rocky guitars of Short Bursts, the room erupted into applause.

To finish, the band played some more new material, except this song felt a bit different. The track seemed to fuck everything into the one, harsh guitar with melody’s and slow drums, then flipped to a more mellow sound on the guitar, rougher vocals and the drums going crazy.

Moments like that went to show that the new material didn’t put a dampener on the night though the lack of older stuff definitely did. This probably wasn’t helped by expectations being incredibly high due to the wait and while it was a good night, it felt likes more of an album listening party at times as opposed to the comeback gig some fans may have hoped for.