While there isn’t much of a musical hierarchy in terms of live music in Scotland, if there was then Ayr would no doubt be left in the corner while Glasgow and Edinburgh tan a few at their round-table. It’s not through a lack of trying though and over the past few years, the McCluskey brothers have been chatting up the competing cities for a place at the metaphorical bench.

With the likes of Codist, The Vegan Leather, Pronto Mama and Hector Bizerk on Liam and Shaun’s previous line of gigs, the boys have hit a real sweet spot in Ayr that has went previously unnoticed and has breathed new life into the small seaside town’s live scene.

While the West of the Moon was the usual haven for their gigs, tonight’s proceedings were moved to Fury’s after the restaurant’s closure – it could have came off as a last minute choice of venue but the choice of a spacious yet intimate nightclub was ultimately very fitting, especially with first support act HUSH taking the stage.

The solo project of Harry Mawb, the influences of both EDM and IDM were on full show during his near flawless set, his eyes fixated on his deck like a blacksmith with an anvil. The synthetic creaks and drum kicks carried his performance over half an hour, the whole set feeling like one seamless track which is hard to come by especially in a live setting where anything and everything can go wrong: instead, Mawb went from soothing, tranquil beats to some hard, jungle ones that make the Aphex Twin comparison near impossible to avoid. Smooth as butter and never overcompensating, the ambient work of HUSH was certainly a curveball but with the flashing lights of primary colours engulfing him on stage, it would be hard to argue that it wasn’t perfectly suited.

The choice to follow up some atmospheric electronic music with some hard hitting alt-rock may not seem like an obvious one but as The Belafonte kicked off, it was an undeniably clever one. Variety is the spice of life but even if this Ayrshire rock outfit were surrounded by like-minded bands, they would still stand out no doubt about it: playing a range tracks, most notably that off their Warm Bones EP that dropped last year, the broody three piece gave the audience a taste of emo embedded rock.

The weirdly titled Dogs Can’t Look Up starts off with intimidating strings as well as some deliciously coupled up vocals from Josh and Jordan on guitar and bass respectively – everything eventually builds up to a grungy chorus with the refrain on “no particular reason” etching itself into your cranium upon impact. The rather aptly titled Calm keeps things consistent with some chugging guitars leading things up to a somewhat laid back boom, at least in the context of the band’s setlist. As the band’s set came to a close, the audience was left with a feeling that The Belafonte aren’t like much else in the Scottish rock scene: others may try and imitate what has worked for countless other indie outfits but they seem to be rather happy doing their own things, regardless if that includes killer hooks or odd lyrics about your kin consuming you. 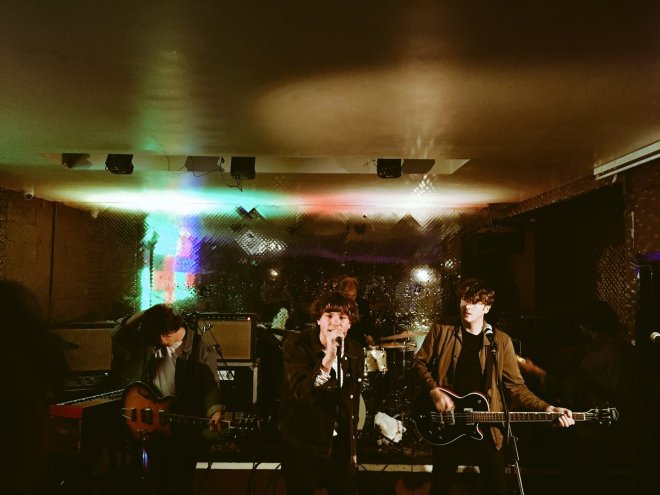 Like some sort of weird combination of what had came before, headliners Neon Waltz took to the stage to a roar of applause: who can say they’re surprised considering the act have supported Noel Gallagher’s High Flying Birds and just last month dropped their debut album. As they began their set, the boys made good on the hype that preceded them – one of the most notable things about the band is their front-man Jordan Shearer, an absolute natural at keeping the crowd’s attention and packing a silky smooth set of vocals that lace over the act’s gorgeous instrumentals, it’s not hard to see why the Bobby Gillespie comparisons have been brought up numerous times.

Speaking of instrumentals, right off the bat you’ll recognise the rather odd inclusion of an organ; not exactly rock and roll but an addition to the band dynamic that gives them a rather unique flair in their respective field. On Dreamers it gets its moment in the sun, giving myself my first experience of an organ solo midway through the track. This song seems like the band’s ideal number for their sets, a sha la la la singalong for a chorus slowly becoming the act’s staple throughout quite a few songs on the setlist.

Sundial  packs another one of these though also shines through as one of the strongest pieces the band have crafted to date. It was at this moment during the set that the band’s real appeal became evidently clear, a laid back bunch of boys that may seem like they don’t care but the level of attention put into several moments through their gig confirmed their position at the top of the bill.

All in all, the McCluskey brothers put the fresh in fresher event.