It’s hard to recall the last time there was any updates to one of Glasgow’s many iconic venues: there’s been shifts of course (SECC was previously the go to venue for big acts before the Hydro came along) but nothing notable in the way of evolution.

So when it came to last night’s gig, it marked not only the return of a band that have seemingly defined the 2010’s in many regards but also one of the cities’ most underrated venues being given a steroid boost. As opposed to the usual warehouse being used to host the night’s events, the SWG3 branched outside into an area usually saved for markets and the sorts. With multiple food carts, bars and merchandise tables, it felt like a mini pop up festival that already gave the night a unique flair. 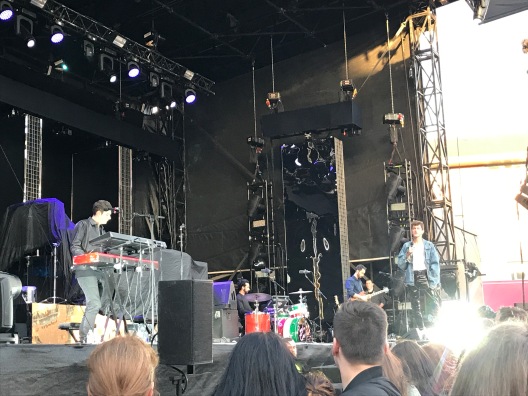 Supporting The XX last night were Perfume Genius, Mike Hadreas’ solo project that has spawned some of the most lavish and lush music of the past few years. While they’re expected to play in a far more intimate venue later on this year, Glasgow’s School of Art on November 2nd, the art pop outfit were very much at home on stage in front of hundreds of ravenous fans.

Despite the gorgeous aesthetic of not only his music but his wardrobe, the MJ white socks black shoes and leather trousers screamed glam, Perfume Genius hit on some very real topics – touching on sexuality, inner turmoil both physically and mentally as well as hatred that Hadreas has faced, the juxtaposing nature of their music was unapologetically beautiful and had the crowd gasping for more. 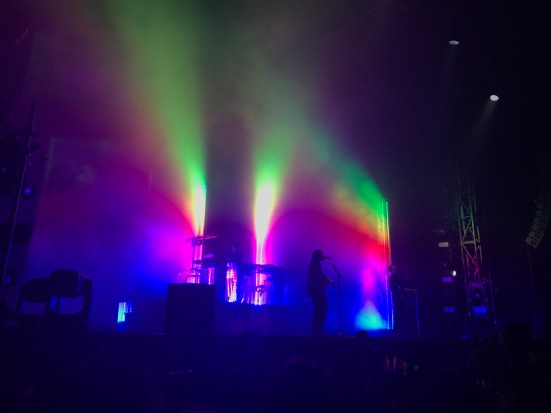 While Perfume Genius put on an amazing show, The XX were the band many had waited hours for or, if you’re like myself, years to see in the flesh. The indie pop act seemingly came out of nowhere on the tail-end of the noughties with their self-titled debut and have been steadily gaining momentum in both the mainstream and niche circles.

Thankfully, the almost 4 year long wait since they last played as a group did not leave anyone disappointed – surrounded by reflective surfaces, resembling the artwork of their recently released I See You, The XX had the foresight of having a stage just as appealing as the music they were playing. A large chunk of new material was played as you can expect from a tour promoting the aforementioned third LP: Jamie was flawless on his transparent platform using his sample driven sound to deliver deliciously layered tracks like Say Something Loving and Lips with Oliver and Romy being on incredibly strong form.

However, the moments the band shined brightest were when the band’s friendship that has spanned more than ten years were on show. Romy’s incredibly personal performance of the aptly titled Performance, an interpretive song that in one way or another touches on depression, leaving the audience covered in goosebumps – this was quickly followed up by an embracing hug between Oli and Romy, a perfect example of the heart that drives this band.

As the set drew to a close, the band swapped up the sombre, melodic sound for a more dancy affair. On Hold, the first single the band had teased this year, was the penultimate track and had the audience in the palm of their hands, dancing away in way not at all unlike the moves you’d expect to see within the SWG3 itself. In a move that was warmly welcomed, Jamie XX played one of the many songs on his debut In Colour that featured Romy, backed up by a beautiful rainbow spectrum swallowing up the stage.

Some may assume that a band making a beautiful transition from album to live would be a bad thing but with how gorgeous the entire night was, there was no complaining: a beautiful tasting light wine as opposed to a harsh, intoxicating one.