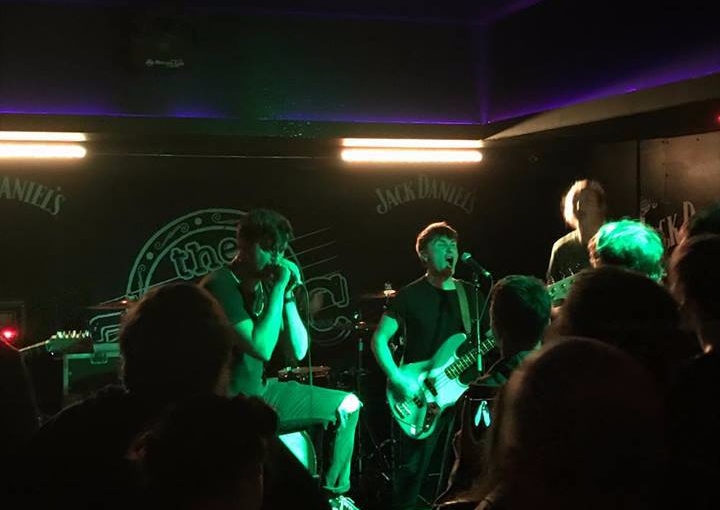 Scotland and pop-punk are words that are rarely spoken in the same sentence positively, but Edinburgh band Woes are here to change that stigma. Being a relatively new band to the scene, the four-piece have gained a relatively small, but loyal fan base in Scotland. They’ve got a full EP under their belt and in all its pop punk glory, it really is an absolute joy to listen to. I recently got to see the band play a headline show in the tiny garage attic, along side some amazing support.

Campfires were the aforementioned fantastic main support, hailing from Aberdeen to back up the headliners in an underrepresented genre. Playing songs from their debut EP, they showed promise that they are ready to give their all to reach the summit of angsty alt-rock. Songs such as Like a Cancer and Same Streets really went off with the crowd, and the effort they put into each and every second of their performance showed throughout, getting the crowd ready and raring for the main event.

While the preceding band were great, Woes still packed a punch and certainly knew how to put on a show. Opening with fan favourite Tight Af, the bar was set high for the rest of the set. With catchy riffs and chorus, the crowd were loving it from the opening bar. Other songs from the self titled EP Be Alone and Winter Sun were equally as good, showcasing energy and passion from the young Edinburgh pop punks. As well as playing the songs people knew and loved, the band debuted new music which they said will be on their upcoming album (yet to be announced). Ending the set with Worst Friend was definitely the highlight of the set. True passion for music was shown, and it was easy to see the heart and soul the band poured into making the show memorable for the fans who have came to see them from all over the place.

With huge opportunities being given to the band, including opening for Neck Deep on their massive U.K. Tour, the band are certainly not slowing down. If they continue to show us the passion they have thus far, Woes will be a name brought up in every conversation about Scottish music and pop punk.