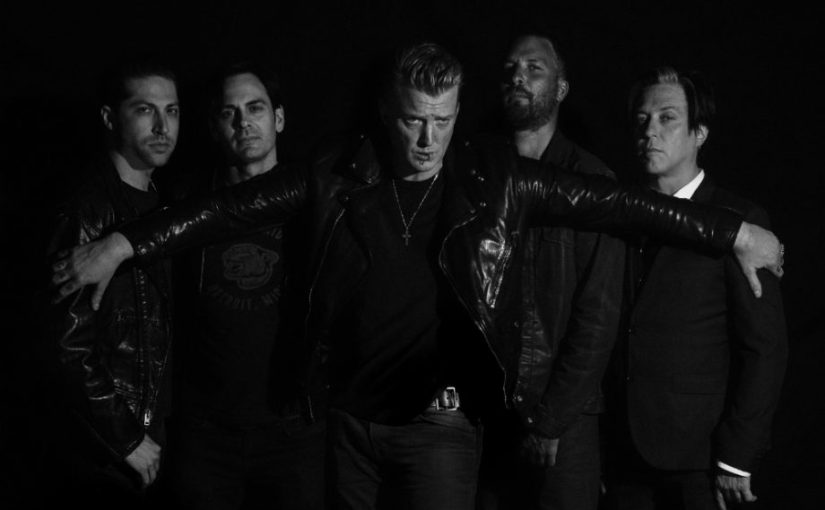 Oh, like The EAGLE Has Landed. Haha. That’s funny.

Back with another single off the imminently arriving Villains, Queens of the Stone Age have treated us to another track, this time in the form of a classic QotSA slow-but-heavy, The Evil Has Landed.

As soon as that dirty, filthy, mmph yeah, octaved riff kicks in, you know that you’re planted firmly in Homme territory. It does, of course, help that Mark Ronson is producing this album, but nonetheless, it’s that familiar sound that feels like you’re getting a Thai massage from Billy Gibbons of ZZ Top, and with QotSA, you know there’ll be a happy ending.

Whilst two tracks does not an album make, both this and The Way You Used to Do are very positive signs as to how Villains will look, sound and feel. The Evil Has Landed is a bluesy slow jam, with growing, whining guitar bends aplenty, ideal for getting that slow headbanging on the go as you tap your foot and slide down into the very depths of this song, sort of like a rough riding version of Alan’s Deep Bath from I’m Alan Partridge. Let’s just finish your neck off now with some final suds. Mmmmm!

But towards the end of the song, the slow jam pulls you out of the bath as you’re thrown into a hard ‘n’ rockin’ finish, making it feel like a song of two halves. The bluesy slow jam at the start, and the struttin’ rock-out-with-your-cock out at the end. You’ve literally been given two songs for the price of one here. That’s the kind of people Queens of the Stone Age are.

Not to paint this song in a negative light, but there’s nothing special about this song. There’s no real talking point, apart from a Spanish-ish rolled ‘r’ from Josh Homme towards the end. Sounds a bit like “Rrrrrrow!”. The ending of the song is great, even if the first half was bad, it’d be saved by the end of the song. Whilst there’s no massive talking point about this song, that’s not a bad thing, it’s just a rockin’ track from QotSA, the kind we’ve come to expect from them over the years. It’s just fantastic. It’s a platter of tasty riffs and mini solos to fill you to the brim. It sounds mean, somewhat unapologetic, like it’s about to take a swing at you.

If the rest of Villains sounds like the two tracks that have already broken cover, QotSA may just well top the brilliance that was …Like Clockwork, but at the very least, will bring out one of the most enjoyable albums this year. It might not be special, but The Evil Has Landed will certainly get you up, moving and rocking.

2 thoughts on “Track Review: Queens Of The Stone Age – The Evil Has Landed”