There’s that old saying that you should never judge a book by its cover: have a glance at a novel like Trainspotting and you’d expect some supernatural story about skeletons as opposed to the morally ambiguous, heroin fuelled epic that it is. Chris McQueer’s debut book Hings sees that rule, stares at it with a raised eyebrow smirk and drop kicks it out the nearest window – with the neck of a bottle that bares an uncanny resemblance to Scotland’s favourite tonic creeping from the bottom corner, a burst of beautiful colours from every palette smear the sleeve with vibrant beauty.

This description alone is enough to give you an idea of what to expect from McQueer with his compilation of short stories. The use of a drink so etched into the working class stereotype and giving it this nice twist, whether intentional or not, is refreshing and ties not only into the author’s background but the whole host of characters that will lead you through the 200+ pages Hings has to offer.

A common comparison has been drawn between McQueer and other famous Scottish figures such as Irvine Welsh and Limmy which, once you’ve read a handful of stories, is clear to see why: a fair few of the characters have their speech written with that Filth-esque dialect where your “yers” and “kehns” are worn proudly just like a G-star t-shirt. Limmy is credited with making the classic weegie speak a bit more mainstream thanks to his show and now cult status on Twitter though his side of the comparison comes more from his endeavours in Daft Wee Stories – some tales will be fully fleshed out, spanning for pages while others will just, well, end, abruptly and usually with a conclusion so absurd that you’ll drop your copy from laughing – here’s hoping you’re no reading any stories on your phone.

However, McQueer’s stuff is so unique and just outright imaginative that to leave the description of such a writer solely to this would be doing his work a great disservice. So many of these stories revolve around a mundane or over-used story, say for instance getting bullied in A Fistful of Coppers, and are injected with enough creativity that they’re elevated to 3 page epics: the aforementioned Coppers story is one of the shortest in Hings but is presented much like the gritty western its name is derived from, the Mexican village replaced with a playground but the showdown being just as satisfying. Examples like this are numerous but it never gets tiresome or repetitive, reading like Interdimensional Cable skits from Rick and Morty but with more depth.

It’s when McQueer pushes himself out of his usual comfort zone that Hing’s strongest moments occur. While most of his work up to this date have been predominantly comedies, there are a few stories that try to do so much more than get a chuckle out of you. Let’s take for instance Lads, a story that starts out just like your usual “ZANTE 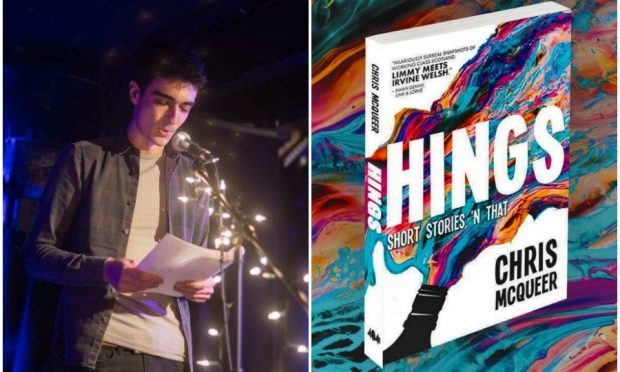 HOLIDAY WITH THE BOYS” that you expect it to just play out as a satire of this sixth year holiday patter that haunts your Facebook feed everyday. However, as it continues, things start to become more of a romantic affair, much in the vain of Moonlight though instead of a totally serious drama revolving around sexuality and race, Lads is a funny, adventurous romp with our lead finding himself with his rag-tag pal bringing some comic relief.

The same can be said about Bowls, my personal favourite of the bunch, which plays out like Thelma and Louise that touches on relationships, social stigma and class effortlessly. Easily being the longest story of the lot, the story does that aforementioned trick of taking something as mundane as bowls and turning it into a thriller that still never loses that comedy element which makes a McQueer story a McQueer story. A quick note: try all you want to imagine Angie as anyone other than Jacqueline McCafferty but you’ll never escape it.

It would have been so easy for McQueer to play it safe, bash out a few short stories that stuck closely to the formula that have made him such a icon in the Scottish writer scene. Thankfully, he’s not only pushed himself out his comfort zone but twisted everyone’s perceptions of the writer – he’s undeniably funny but his ability to weave a well written narrative with likeable, and dislikeable, characters in addition to his sheer creativity is what makes him such a juggernaut.

“Are you ready?” for the year of McQueer reads the last line of Hing’s blurb – “fuckin yes ah am” I can say with resounding confidence.