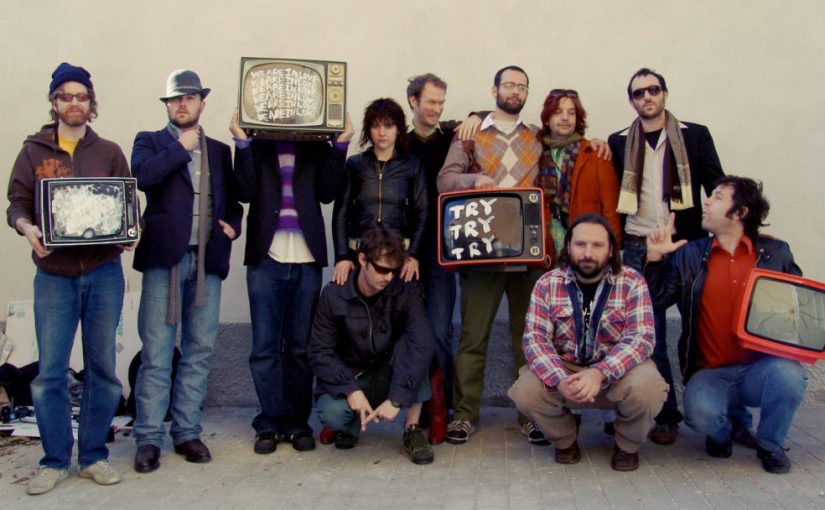 Seven years after their previous release and over a decade since their arrival on the indie-rock scene, Broken Social Scene announced their new album Hug of Thunder this year, bringing back their experimental, baroque-rock sound, infused with electronic influences and grand classical orchestration. Their new release sounds new and fresh, yet reminisces of the inventive and intricate sounds found in their previous albums such as You Forgot It In People, and their self-titled LP.

The first track on the LP, Halfway Home, makes no secret of this – it’s an explosion of noise that marks the Canadian collective’s arrival, with fun and vibrant instrumentation and masterful use of dynamics and texture to create a track that is a wonderful opener to the album. As the first single the band released before the album came out, it feels like what will be the most popular track from it, and definitely the most enjoyable.

The album transitions into Protest Song, sang by Emily Haines. The versatility of Broken Social Scene is what makes the band so special, and it adds to the unique creativity that the band bring to the table with each of their album releases. The exchange of vocals between individual artists in the band highlight this, with some headed by Kevin Drew and others by fellow artists such as Feist. Haines’ vocals on this track are quaint and suit the track and its’ instrumentation. The ethereal and reverb-ridden Skyline follows, where the repetitive lyrics and guitar strums feel somewhat tiresome, showing a lack of creative consistency within the album in places.

Stay Happy is a particular strong point for the album, where the compact and sharp drums, accompanied by a prominent and strong bassline carry the track to a climactic and powerful ending, where the extra orchestration of the band are made evident. The title track, Hug of Thunder, is Feist’s delightful return to the band, after, and her vocals are absolutely perfect for a song of this intimate and discreet dynamic. Similar to Stay Happy, the synth electronic drums suit the piece again here. In an April 2017 interview with Stereogum, Feist lays out the spontaneous and brisk process for the song’s creation, and the momentum of more band members and more instruments being added in the birth of the track has worked well, creating a sentimental and meaningful piece.

Tracks such as Victim Lover seem uninspired – whilst many of the tracks on this record and many in Broken Social Scene’s past discography are inventive, out-going and experimental, Victim Lover and Gonna Get Better don’t seem to be in a similar vein, and simply don’t seem as interesting.

A highlight of the album is Please Take Me With You, a dynamically lacking piece that is a direct contrast to the explosions of sound found in parts of the album, that tells a story of a love-struck protagonist, desiring the touch and warmth of a particular someone. The breakbeat-influenced drumbeats don’t seem like they’d fit in such a quiet and romantic piece, but really help carry the song in an unprecedented way.

Hug of Thunder is a welcome return for the Canadian indie supergroup, where they made sure to implement sounds from their past and the current, and infusions that border on the future. There are some tracks that seem underwhelming but they are contrasted with emotive and clever songwriting on others, that makes for an enjoyable listen.