Now that the dust has settled, the rain soaked clothes dried and the hangovers somewhat cured, it’s time to have a look at TRNSMT. A festival that seemingly came out of nowhere with the feat of filling in the shoes of T In The Park, the odds seemed against the Glasgow based event yet it managed to leave everyone in attendance more than pleased. Glasgow Green was the perfect location for a festival like this, not too out of the way and full of beautiful scenery – unlike it’s predecessor, stages weren’t miles apart yet the sound was never compromised by the distance.

Were there mistakes? Of course – sound at certain stages seemed to flicker in quality repeatedly, the Saturday was weak with some misplaced acts and things like food and drink were ridiculously priced. Despite that though, the atmosphere was incredible and was worth every penny. Then there’s the acts who made it all worth the sore feet and being hit by multiple cups of questionable fluids: some are big and some may not have been on your radar prior but regardless, these are the artists that don’t so much need your attention but demand it.

A band that we’ve covered extensively since they first came onto the scene with their hot indie rock single Sign Language, Vistas were oddly low on the King Tuts bill considering the success and crowd they have accumulated. Starting off with the aforementioned breakout track, the Edinburgh pop-rock outfit had the crowd chanting and moshing along to their catchy infusion of noughties indie and their own wee touches. Teasing a new track due to drop in August, Vistas made sure not to waste a single second when it came to their set, playing some classic tunes (yes, a band this new have somehow managed to make a classic tune) at breakneck speed.

With the sun shining down, the band were the perfect way to start the day and with the reaction they got from the audience, I won’t be surprised to see this band become a regular sight at festivals all over the UK.

If you had asked me a few years back if I would seriously enjoy a 1975 gig then I would have laughed in your face (then swiftly apologised ofc). Now that the actual scenario has occurred, and now that you’ve seen its placement on this list, I have to admit how shocked I was by the sheer quality of this set. A lot of fans, mainly Twin die hards, complained that they were on before Biffy instead of Twin Atlantic though when you put down the facts (The 1975 are a bigger act, more critically acclaimed and put on a real visual spectacle in their shows) then you can’t really complain.

The 1975 for sure justified their position on the line-up, frontman Matty Healy, love him or hate him, showing why so many people tend to call him one of the best showmen around at the moment. From the clunky, oddly nice dancing to how well his vocals translate from LP to the stage, it was an easy to love gig – even if half the crowd in front of you had their phones up. This in addition to the visuals going on stage as well as the chat between the band and the audience, even a wee cringe line about a ‘ballroom dancing pit’, made the whole performance feel so wrong yet so right. The music itself may range from bland to amazing and back again all too frequently but with the show the boys put on, their place on this list is undeniable. 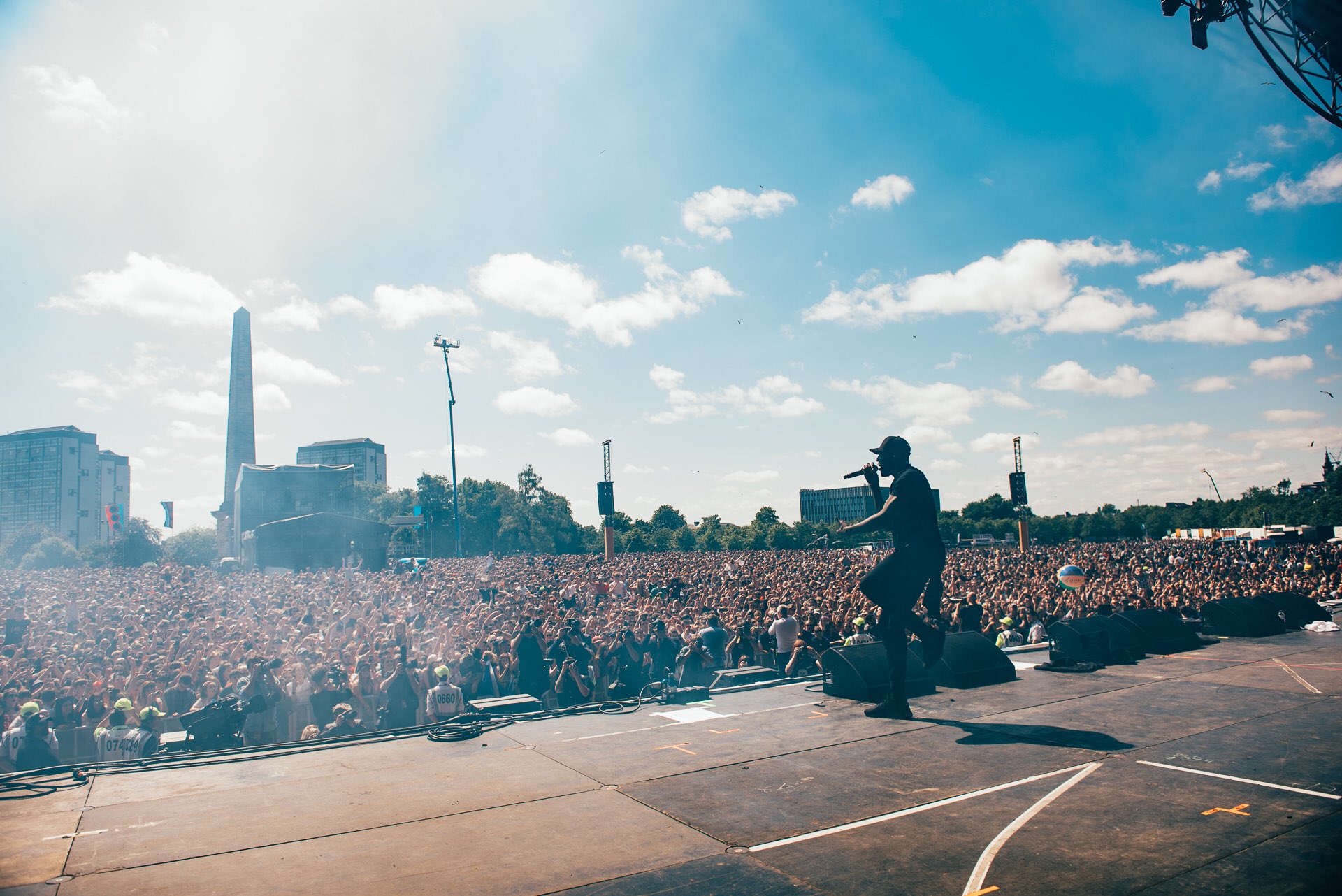 If we’re being transparent, we tried our best not to go anywhere near the main stage today: a bunch of samey, indie rock bands that seem to do more harm than good to the genre they claim to care about so much. Stormzy was on our must see list though and boy, he somehow still blew our expectations out of the park.

The energy of a cheetah and with the same instinct, he put on the show of a lifetime and managed to convert the sceptics in the crowd. There was no moment to catch your breath bar Cigarettes and Cush and even then, most of the crowd were singing along in typical festival fashion. Even when he covered Ed Sheeran, something that on paper should have made us wince in pain, the lord of the mic still made a positive mark – it almost begs the question of whether or not Stormzy can do any wrong. As he closes the set with the classic Shut Up, the flood of charisma and gratitude radiating from the man is undeniable. Now that Grime has solidified itself in the public sphere, it’s safe to say that Stormzy will be at the top of his game for the foreseeable future.

Who would have honestly thought that one of the most exciting sets of the entire day would have came from a wee glitzy group from Paisley? Well, those who were aware of The Vegan Leather before today certainly did and even their expectations were blown out of the water. With frontman Gian-Luca walking out in a wee, glimmering disco jacket wielding his guitar and a silver looking (fake) peacock, the feeling of the band’s performance was firmly set.

Tracks like Shake It, while still in their infancy, still got a reaction from the crowd with a lot of people near the front dancing and chanting along: when you have Talking Heads meets Yeah Yeah Yeahs meet LCD-Soundsystem as the closest to a description of your band’s sound, who can really blame them? Out of the lot though, This House gathered the biggest reaction out of the band’s setlist, even literally bringing the audience to their knees just for that eruptious climax of both the song and the band’s set. If The Vegan Leather weren’t on anyone’s radar before this gig, then they for sure as hell are firmly placed at the top now.

Did you really not expect to see this band land highly on this list? We could talk all day about the quality of the band’s music, recent LPs compared to the original trilogy and what not, but when it comes to the live shows there’s one thing that everyone can admit – Biffy Clyro try to make every gig their best.

Sunday night was no different and you really couldn’t pick a better band to end your festival with – from the pyros to confetti to fucking fireworks, the band didn’t hold back when it came to the miscellaneous splendour that they have a knack for. Of course,the real attraction is the band themselves and it’s hard to think of a time that Simon Neil acted more giddy: “Thanks for not kicking me out of Scotland for wearing sequinned trousers” the front-man quips at one point, managing to keep that down to earth appeal that you wouldn’t expect from a band who have “achieved so much more than you possibly thought they could”. The setlist was exactly what you expect from a festival but there was some gems here and there: All The Way Down has only been played once since 2014 so it was a total shock to see it played last night and There’s No Such Thing As A Jaggy Snake has a similar track record, unsurprisingly making them the highlights of the night.

“This might sound like I’m blowing smoke on your balls, but tonight has been our favourite ever show in Scotland” says Neil towards the end of the set. He may very well be doing so but from last night’s performance, the smiles on their faces and the sweat dripping down, if they’re lying they deserve a bloody Oscar for it.

Here it was, the main event of Friday night. Radiohead‘s reputation precedes them though that changes from person to person: some will naively tell you that they’re a bunch of moaners, others will tell you they’re the best band of all time – funnily enough, both statements aren’t exclusive from the either. As the band began things with a curveball, Let Down starting off the night’s proceedings instead of the tour’s old faithful DayDreaming intro, the way tonight’s performance was gonna go was set.

There were too many highlights to count: Thom Yorke’s infectious da dancing to Myxomatosis had mulitple folk in the audience trying to replicate it, there was the sing-song loveliness of the band’s not so deep cuts like No Surprises and Paranoid Android, beautiful moments where the two infused like during Bodysnatchers that probably had the biggest reaction from the audience even though it’s not one of the best known tracks from the group. Repeatedly thanking the audience throughout the set, Yorke and co’s appreciation for both everyone in attendance and the fans who have got them there was honest and heartwarming.

It seems a bit obvious to have a headliner as one of the top acts of the weekend but if you were there, or caught coverage of TRNSMT, then you know that there really wasn’t anything like this all weekend. “This is what you get, when you mess with us” Yorke sings gracefully on closing track Karma Police: if this is the result then everyone should fuck with Radiohead more often.