It’s finally arrived: after months of waiting and distortion fuelled trailers, TRNSMT has made its debut. Facing the feat of having to fill in the shoes of Scotland’s quintessential festival T In The Park, this weekend will be facing a lot of scrutiny both in its layout in addition to the music.

Friday was very much the “appeal to the auld yins” day though that didn’t mean it was gonna alienate anyone that was young by any means. In fact, it was arguably the strongest day out of the entire weekend and for good reason too: let’s dive in.

Who would have honestly thought that one of the most exciting sets of the entire day would have came from a wee glitzy group from Paisley? Well, those who were aware of The Vegan Leather before today certainly did and even their expectations were blown out of the water. With frontman Gian-Luca walking out in a wee, glimmering disco jacket wielding his guitar and a silver looking (fake) peacock, the feeling of the band’s performance was firmly set.

Tracks like Shake It, while still in their infancy, still got a reaction from the crowd with a lot of people near the front dancing and chanting along: when you have Talking Heads meets Yeah Yeah Yeahs meet LCD-Soundsystem as the closest to a description of your band’s sound, who can really blame them? Out of the lot though, This House gathered the biggest reaction out of the band’s setlist, even literally bringing the audience to their knees just for that eruptious climax of both the song and the band’s set. If The Vegan Leather weren’t on anyone’s radar before this gig, then they for sure as hell are firmly placed at the top now. 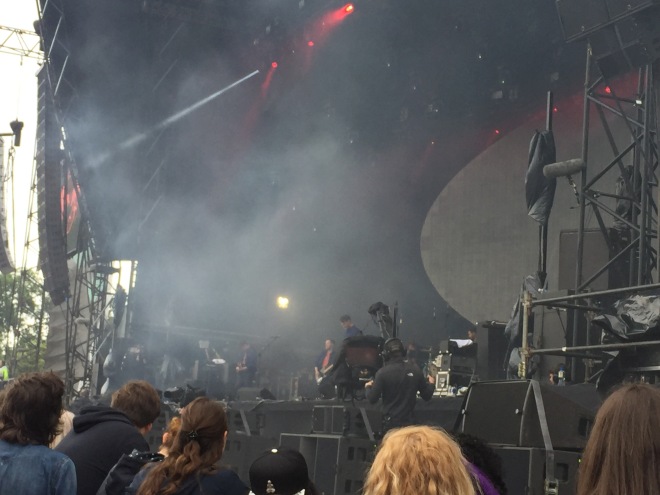 One of the first bands to play the TRNSMT main stage, Everything Everything had a lot of pressure on them to deliver the goods – they brought them first class by art-pop drone, attaching a big hug and some weird line about a fat child in a push chair along with it. The set’s highlights were undoubtedly the moments where the band played anything off Get To Heaven, an album which converted so many and affirmed the love of fans prior: Jonathan Higgs’ vocals are pushed to their very limits and just when you think they’re about to break, they metamorphose into these grandiose displays of sheer beauty. Some new stuff was shown off that’s set to appear on the band’s upcoming LP A Fever Dream on August 18th and from what we saw, we have more than enough reason to get excited with some dance elements surely being implemented into their latest song’s DNA. Sadly, we’ll have to wait until then to get a better feel of where Everything Everything are going but from this set alone, they’re already at the peak of Kilimanjaro in terms of quality.

The man’s voice has a likeable quality to it akin to leather or caramel. Spent most of my time at the main stage melting over it. Matched with a decent set. – Fraser Nunn (@badknitbearD)

It wouldn’t be a Scottish music festival without having, you know, a Scottish band playing on its first day on the main stage. Question is, who on earth do you get to play before fucking Radiohead? The question was answered by a melodic and resounding “us” by Belle and Sebastian, one act that have managed to make it both here and over the pond though it was clear tonight that they haven’t lost their love of both Scotland and their roots.

Their was the back and forth patter between the crowd and frontman Stuart Murdoch who told stories of him walking through Glasgow Green after being at the old 13th Note and getting on the ferry to Dunoon to give some story to the tracks they were about to play. Oh boy, the tracks: not wanting to take from one album too much, Belle and Sebastian gave a diverse setlist with some unappreciated gems as well as some fan favourites, The Boy With The Arab Strap and Stars Of Track and Field getting an overwhelmingly positive reception by the audience. Even those who may have been in the crowd just to get a bit closer to Thom Yorke and co. were surprised by just how good the act were: hell, even fans like ourselves couldn’t believe the showmanship displayed by a band over two decades into their lifespan. 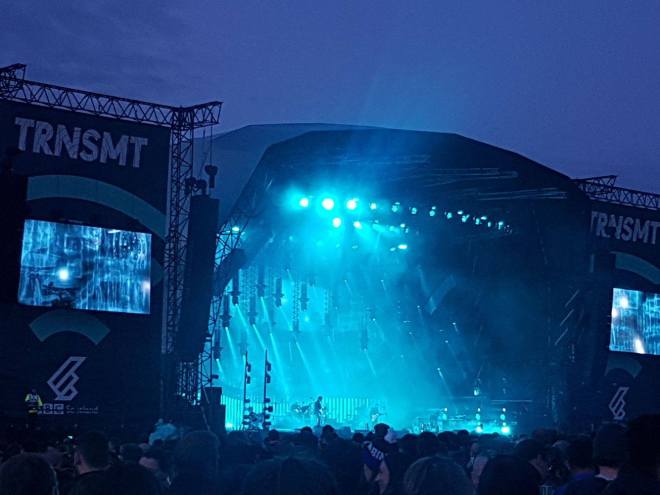 Here it was, the main event. Radiohead‘s reputation precedes them though that changes from person to person: some will naively tell you that they’re a bunch of moaners, others will tell you they’re the best band of all time – funnily enough, both statements aren’t exclusive from the either. As the band began things with a curveball, Let Down starting off the night’s proceedings instead of the tour’s old faithful DayDreaming intro, the way tonight’s performance was gonna go was set.

There were too many highlights to count: Thom Yorke’s infectious da dancing to Myxomatosis had mulitple folk in the audience trying to replicate it, there was the sing-song loveliness of the band’s not so deep cuts like No Surprises and Paranoid Android, beautiful moments where the two infused like during Bodysnatchers that probably had the biggest reaction from the audience even though it’s not one of the best known tracks from the group. Repeatedly thanking the audience throughout the set, Yorke and co’s appreciation for both everyone in attendance and the fans who have got them there was honest and heartwarming.

“This is what you get, when you mess with us” Yorke sings gracefully on closing track Karma Police: if this is the result then everyone should fuck with Radiohead more often.