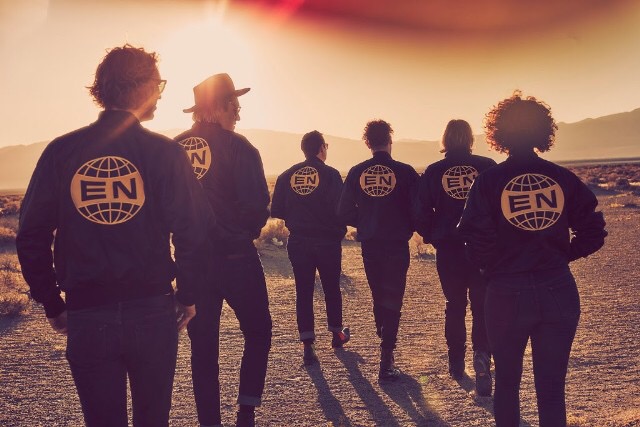 Throughout this week, Arcade Fire have been preparing us for something big. Following reports of new material being debuted at a secret show in Montreal earlier in the month, proceedings kicked off when it was revealed that the band will be releasing their next album under Columbia Records and that copies of the new single will be on sale in 12″ vinyl at Primavera Sound Festival in Barcelona.

Following the recent trend of entertaining music fans with mysterious clues on social media, an obscure Arcade Fire Twitter account disguised as a Russian spambot began sharing information about the single, entitled Everything Now, before linking to a now-deleted YouTube video containing an excerpt of the music. Not long after, the band unveiled their new song in its entirety along with the accompanying video depicting an eerie scene where the band members don matching grey overalls and perform amidst post-apocalyptic surroundings, the slogan ‘Everything Now’ appearing ominously on signs and billboards.

The music itself, however, could not be further apart from this. Beginning with sweeping piano and strings, the drums kick in with a distinctively 80s disco groove in what feels like a lighter, cheerier evolution of the distorted dance-rock their 2013 album Reflektor delivered. Comparisons with ABBA are, of course, inevitable – listeners could be forgiven for mistaking this for a lost B-side off Arrival; however, Win Butler manages to channel the Swedish pop stars’ ability to conceal heavy subject matters behind upbeat melodies to great effect. Dealing with issues such as consumerism and instant gratification, Butler decries the ease with which people can consume mass media, singing, “Every inch of space in your head / Is filled up with the things that you read / I guess you’ve got everything now“.

With their latest release, the Canadian indie rock group have produced a summer anthem and an undeniably catchy one at that. While lyrically thought-provoking, musically it fails to reach the creative heights of their stand-out efforts such as The Suburbs. Honorable mentions to the pan flute riff sampled from The Coffee Cola Song, though – only Arcade Fire could pull that off convincingly.