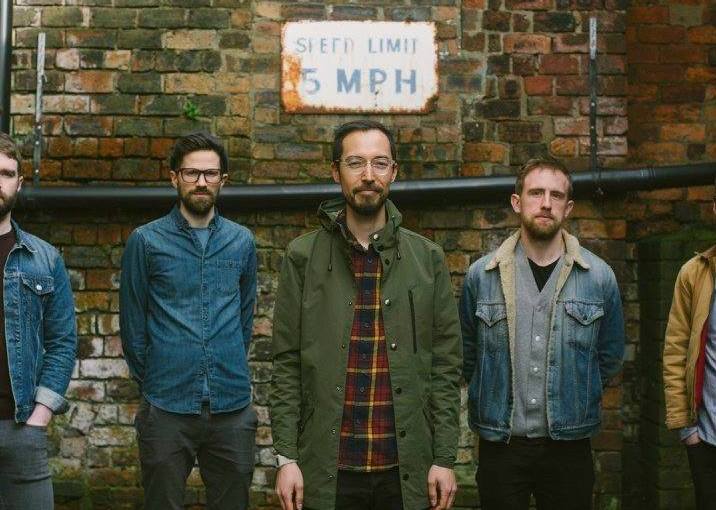 Shuffling around a room that includes a cherry red leather couch, surrounded by a globe, fender speakers and what looks like the world’s smallest trumpet, A. Wesley Chung takes a seat. Laughing and questioning just seconds before, he takes on a cool and calm demeanour before breaking into an acoustic ballad titled simply as Asleep In The Kaatskills: a beautiful emo-folk song that resonates with some evocative lyrics delivered with a Scottish-American hybrid twang to them.

Four years later and this video can be seen as the foundations of The Great Albatross‘ career, now seen as a distant memory as Chung leads his act into their debut LP, released on the LP Records label, named after the song that arguably kick-started their career. While very much in the same vain as other Scottish based juggernauts such as Fatherson, Asleep In The Kaatskills isn’t riding on the coattails of more established acts, rather it establishes its own sound and explores themes and stories in its own way, moulding it when needed be.

While not a grandiose concept album or anything of the sorts, Chung‘s ability to set the scene via what seems like knit-pickity precision of sound is a trait that gives The Great Albatross its (I’m so sorry) wings: from the get go, opener Messenger has the slick guitar offerings, notably restrained, that hark back to the same abilities Alt J displayed so effortlessly on their first two LP, painting the picture with ease. Instantaneously, you feel yourself surrounded by beauty as we get some soothing vocalisation as Chung sings of his fatigue, making it all sound like one big hike nearing its eventual end.

We’ve just got started though and very contrarily, Asleep In The Kaatskills has energy in abundance though paces itself. The Honeymoon’s Over starts off quietly, Belle And Sebastian resembling guitar playing being the only notable instrumentals before the chorus kicks in, starting off a jamboree of country-folk influence with gang vocal shouting and banjo picking to boot. Summer’s Gone continues this same sound, implementing a simple piano as Chung starts to chart some more sombre territory, adding in some soothing howling that juxtaposes lyrics that seem to touch upon frayed friendships and depression. As it reaches its conclusion, haunting strings kick in as Chung starts repeating the title track, breaking into, well, a breakdown before ending with “pick the pieces up” being sang on loop with a tired delivery, tying up everything beautifully despite the heartbreaking nature of it all.

It’s not all slowly evolving tracks though: we get a stunning interlude in the form of The Sleepwalker which sees the aforementioned trumpet from that YouTube video from

nearly half a decade ago make an appearance. Nothing quite outshines the other both in volume and quality, displaying this interweaving in instrumentals that helps deliver this strongly structured sound that makes Asleep In The Kaatskills feel so blissful but never boring.

The two closing tracks, the eponymous title song and When I Wake, strip back a lot instrumentally to put Chung in the spotlight: while this album deserves a whole lot of praise for what it does with its sound, the omnipresent member has a voice that pushes itself out of its comfort zone enough that the moments where we get this laid back delivery never feel monotonous or boring. At times it feels like certain tracks start to flow into one another sonically, feeling like one cohesive record that, to some anyway, may feel dull. However, when you take a step back, look at the beautifully structured tracks with the blood, sweat and tears put into their instrumental precision as well as the sheer blissfulness that makes up the record’s DNA, it feels more like one big beautiful dream than an uneventful ride.

With the final line being “when I woke up, I was right next to you“, it feels like that interpretation isn’t just an overcooked analysis.