Kanye West is the embodiment of infamy: since day one, the Chicago rapper has brought controversy with him wherever he goes, dividing the public with his antics and rants. Despite this, it’s hard to think of an artist who has had more of an influence and impact on music in the 21st century quite like Mr. West had. To commemorate the man’s career thus far, everyone in the blinkclyro team has put their heads together, democratically voted and have had their say on the best and the worst of his discography. Quick disclaimer: this is, like, our opinion or whatever, dude. Disagree? The comments down below will house whatever rage you’re feeling. Without further ado, let’s get into our zone and rank…

Yes, it’s a compilation. Yes, there’s filler. Yes, it’s not a perfect album by any stretch of the imagination but Cruel Summer delivers Kanye West in his “pure hits” form, bringing along his friends from the Good Music label for the ride and the results are worth your attention: Mercy.1 is a particular highlight, opening up with a haunting sample from Fuzzy Jones, and then there’s the mandatory appearance of DJ Khaled on Cold.1, backing up Kanye’s frosty flow with an equally chill beat. Cruel Summer is flawed, that there is no doubt about, but the album is still worth a listen to, regardless if it’s not essentially a “Kanye Album”. – Liam Menzies (@blnkclyr)

The only real fault of Late Registration isn’t really anything to do with the album itself. Unfortunately, it got sandwiched in-between The College Dropout and Graduation, two albums that are so vastly different that it makes LR’s task of standing out all the more difficult. LR still had the same heart and knack for making tunes but it felt like more of a music DLC than it did a full blown follow up to TCD. That aside, LR is still a fine piece of music, sadly given the position of forgotten middle child in the first trio of Kanye’s discography. – Liam Menzies (@blnkclyr)

West’s first album is often considered his best by some for its often humorous tone, impressive wordplay, and breathtaking sampling. When The College Dropout dropped in the middle of the bling era of hip-hop, it sounded like nothing the rap world had heard yet. Not only was Kanye’s lyrics on par, his production was incredible and was able to move it’s way into the mainstream pop market while still appealing to hardcore hip-hop heads. The now legendary Chicago artist was able to commentate on the education system in America while establishing a name for himself as a confident MC through hefty bars and catchy hooks. To this day, it stands out as one of the best hip-hop debuts of all time. – Ryan Martin (@Ryanmartin182)

Honestly, I expected this to be in a far higher position. Not only is The College Dropout one of Kanye’s wittiest and charismatic releases to date, it’s also one of his most polished, showing that right off the bat that West was capable of delivering great produced music much like he had done behind the scenes. Balancing bangers with introspective gems, as well as having the best Kanye West song of all time on it, The College Dropout gets my vote for being some of Kanye’s best work to date. – Liam Menzies (@blnkclyr)

6. The Life of Pablo

“TLOP is probably now my most listened to Kanye album, really connected with it and loved how different it was.” – Will Sexton (@willshesleeps)

While he may have a tendency to have a social media breakdown just as regular as his wife will post a selfie and his ambitions may have resulted in him accumulating a great amount of debt, there’s no doubt a great sense of this being art. Just like the most prolific artists who put their blood, sweat, and tears into their work, Kanye has crafted a record that radiates hip hop greatness embedded with a gospel sound as well as his own, despite the few times he colors outside of the lines. – Liam Menzies (@blnkclyr)

“Watch The Throne really reminds me of my early teens: Otis started playing on a music channel when I was abroad one year with my family and my sister and I still adore it five years later.” – Becky Little (@sometimesboring)

“808’s and Heartbreaks will always have a special place in my heart because it was an album that came out at the perfect time when I was younger, listened to it on repeat.” – Will Sexton (@willshesleeps)

“808’s and Heartbreaks blew me away when it came out. It was one of the first CDs I bought with my own money so it’ll always have a piece of my heart devoted solely to it.” – Jake Cordiner (@JJJJAKETH)

Abrasive, crude and sometimes angelic, Kanye created a beast of a record, unlike anything he has released thus far. Influences from alternative hip-hop to acid house fill the 40-minute album and make Yeezus the most shocking release in West’s career since 808’s. Yeezus’s lyrics range from harsh braggadocio to intensely sexual and stand out as some of West’s most controversial lyrics that can come off as cringey at times, while not throwing off the tone of the album. Despite West’s harsh lyricism, Yeezus is a dark horse that powers through from start to finish with such force. – Ryan Martin (@Ryanmartin182) 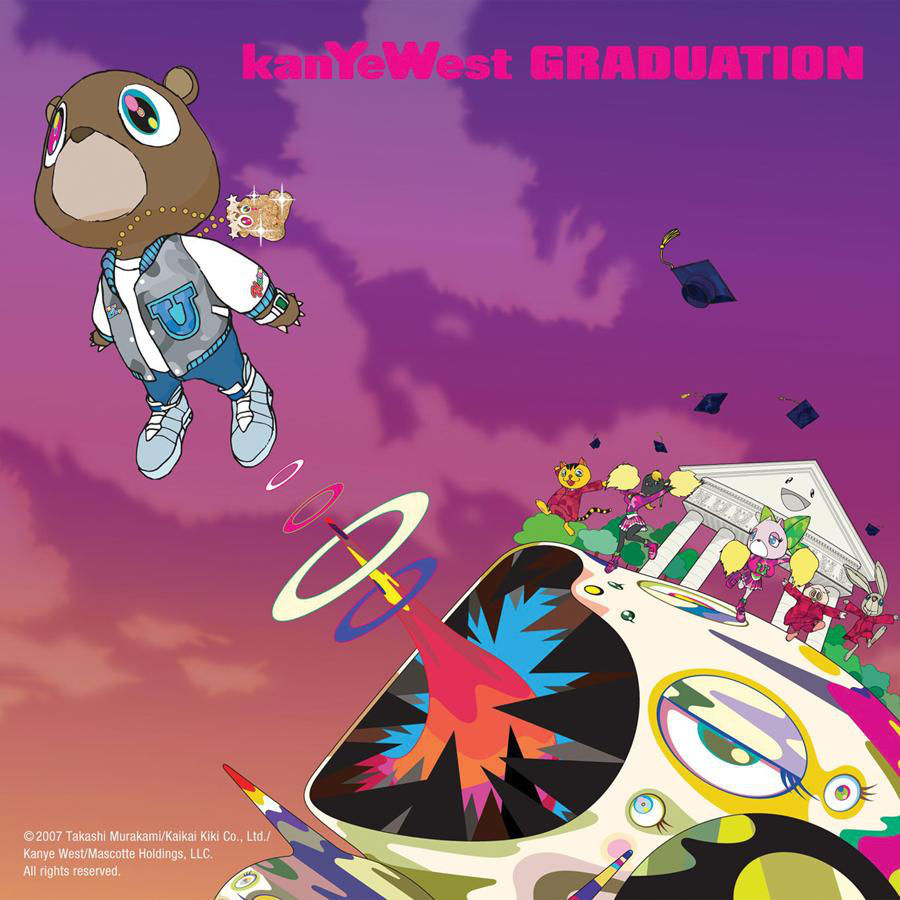 Graduation is, simply put, banger central. Big Brother, Flashing Lights, Stronger, Good Life, fucking HOMECOMING. Not the best produced Kanye album, nor the most advanced in terms of rhyming ability but I love it to death all the same. – Jake Cordiner (@JJJJAKETH)

Kanye’s third LP is, in my eyes, one of his weakest. However, the importance of context is on full display here as bearing in mind the time of Graduation’s release, autotuned braggadocious hip-hop was all the rave and Kanye seemed to be focused on flinging his hat into the ring. Hit after hit after hit, Graduation holds no punches on priding itself in Kanye’s ability to tap into the public’s minds and making their favourite new chart hit well before they even thought of it. I may not be its biggest fan but when you take it for what it is, it’s hardly a letdown. – Liam Menzies (@blnkclyr)

“You can’t say anything about MBDTF that hasn’t already been said, and that’s a testament to the album. It’s easy to forget that people thought Kanye was done after the Taylor Swift incident but MBDTF is the way to respond. Don’t know any albums (from any genre) that sum up an artist’s personality as well as that record does, and when the artist concerned is Kanye West then that’s vividly entertaining, ranging from tracks as braggadocious as Monster to as vulnerable as Runaway.” – Andrew Barr (@weeandrewww)

“Peak Kanye in all aspects, this album combines just the right amount of ego with typically impressive production and enough variety and scope to give us the best album Kanye could offer before and since and probably for the rest of his career.” – Ethian Woodford (@human_dis4ster)

Kanye reaches blissful highs on tracks like Lost in the World and Runaway to stadium anthems on Power and All of the Lights to the dismal grimy beats on So Appalled and Hell of a Life. With his 5th studio album, the legendary artist created not only his best album but one of the best hip-hop records of all time. With some of the best production of the decade, iconic lyricism and well-placed features, West created his magnum opus and topped both his earlier catalog and most hip-hop artists of this generation. – Ryan Martin (@Ryanmartin182)

“MBDTF absolutely speaks for itself, as a complete work it’s potentially the best album in history and it definitely has a fair shout in being the best hip hop album ever as well. Apart from HOV’s verse on Monster

“MBDTF speaks for itself, start to finish gold.” – By Will Sexton (@willshesleeps)

One thought on “RANKED: Kanye West”