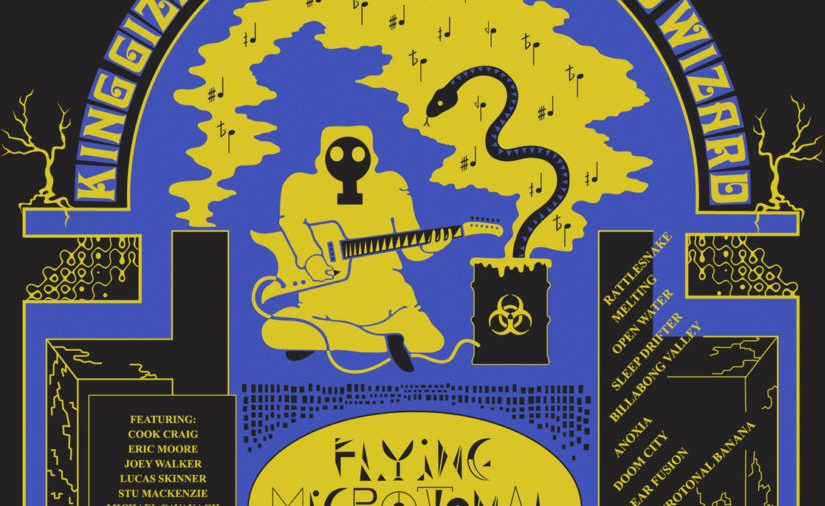 Their long hair, laid-back demeanor, and psych-slacker rock sound may fool you at first, but King Gizzard & the Lizard Wizard are undoubtedly one of the most hard-working bands in Australia. The first of five albums they are planning on releasing this year, and their ninth altogether since their debut ’12 Bar Bruise’ in 2012, Flying Microtonal Banana could be considered a bigger, better and more artistically thought-out version of their previous release, Nonagon Infinity.

Having released this amount of records in such a short space of time, it would be expected that the same ideas and sounds would crop up a lot, but this is entirely untrue- every album of theirs has a new sound, framework and they all have a different, quirky artistic aspect that so many rock bands these days overlook- for example, on Quarters, each song was exactly 10 minutes and 10 seconds long. Not to mention Nonagon Infinity, an album that can be played continuously on a loop and the tracks will blend seamlessly into each other.

Flying Microtonal Banana is no exception. Despite their modifications to their instruments, enabling them to play microtones (hence the title), each track boasts a different and unrelenting sound. Opening track Rattlesnake is the epitome of the King Gizzard we know and love- a 7-minute long adventure of repetitive yet catchy lyrics, static riffs and a bizarre harmonica solo. Melting’s tinny, layered percussion gives a nod to more of an acid jazz sound. The microtonal tunings can be heard loud and clear in the title track, which features Arabic-style guitar riffs blended with their own signature sound, which is what makes them so unique.

Unlike Nonagon Infinity, the tracks on Banana are all based on different riffs. In true King Gizzard style, they all blend into one another without a break, but you can easily tell when one song finishes and another begins. Open Water consists of frantic, sprawling drum beats and gritty lyrics (‘Plight of poor me / No use for screaming here / I’ll drown in / Open water’), but the following track Sleep Drifter takes on a more relaxed vibe, reminiscent of cruising down a road rather than rocketing skywards, which is what many of their songs makes you feel like.

If Flying Microtonal Banana isn’t to your taste, don’t worry- they’ll probably have released another album by the time you have finished reading this. King Gizzard are too fun not to like and although 5 albums in a year is extremely ambitious, no doubt they will pull it off and provide plenty of new and exciting sounds.