Have you noticed the running trend of superhero movies facing massive production problems? If you catched my Deadpool trailer reaction post you’ll remember that it’s been in production for close to a decade and the journey for Ant Man has not been any smoother. Ant Man started development all the way back in 2006 with Edgar Wright, better known as the guy who created Hot Fuzz and Shaun Of The Dead (better known as those two films that are always on ITV2), taking helm of the project. He was the perfect choice as director but as script drafts were completed and test footage was taken, creative differences with Marvel resulted in Wright leaving and Peyton Reed replacing him. It’s been established since his departure that Wright’s decision to leave was due to the film having to tie in with the Marvel Cinematic Universe which no doubt limited what he was able to do.

Fans of the big (well not so big) superhero were left wondering if the film they’ve been anticipating for years was going to be any good. The fact that Wright, who had great success adapting the Scott Pilgrim vs The World books, left had some wondering if anyone would be able to do it, let alone the guy who directed Yes Man. You can’t really blame them either as to the average person, Ant Man is a guy who can turn really small and that’s about it. The trailer that was released a few months before the films release in July managed to calm some down but it was cliched (insert main villain talking sinisterly in the background and a pan shot of the city skyline) leaving some to think this would be Marvel’s first big flop (if you don’t include any of the Thor films or Iron Man 2).

So who is Ant Man? In this film he’s Scott Lang, an ex con who was jailed for burglary and is trying to become a better person so that he can see his daughter. However he realises that the outside world doesn’t treat ex cons so nicely and he soons goes back to his old ways which leads him to Hank Pym who is *surprise* the first Ant Man. Pym is a scientist who created the shrinking technology which allows ant man to shrink down to the size of….well…an ant. However after resigning from S.H.I.E.L.D over 3 decades ago ago and being forced out by his own company by Cross, who is close to replicating Pym’s technology and renaming it the yellow suit, Pym chooses Lang to take on the role of Ant Man to stop Cross at all costs.  “My days of breaking into places and stealing stuff are over. What do you want me to do?” “I want you to break into a place and steal some stuff.”

What ensues is a heist film which is a welcome change to the “fight the big baddy” plot that most marvel films follow. The humour in Ant Man is consistently on point though what else do you expect from a screenplay that was penned by Edgar Wright. Some of the funniest moments come from Michael Pena’s character Luis whose constant ramblings about “so this guy told my cousin” stories never failed to make me or the rest of the audience laugh out loud. At the start I thought he’d be a bit of a mistreated character and used only to progress the plot but he plays the comic relief role perfectly with every word he says being comedy gold, I’d be devastated if we didn’t see him when the inevitable Ant Man 2 comes along. 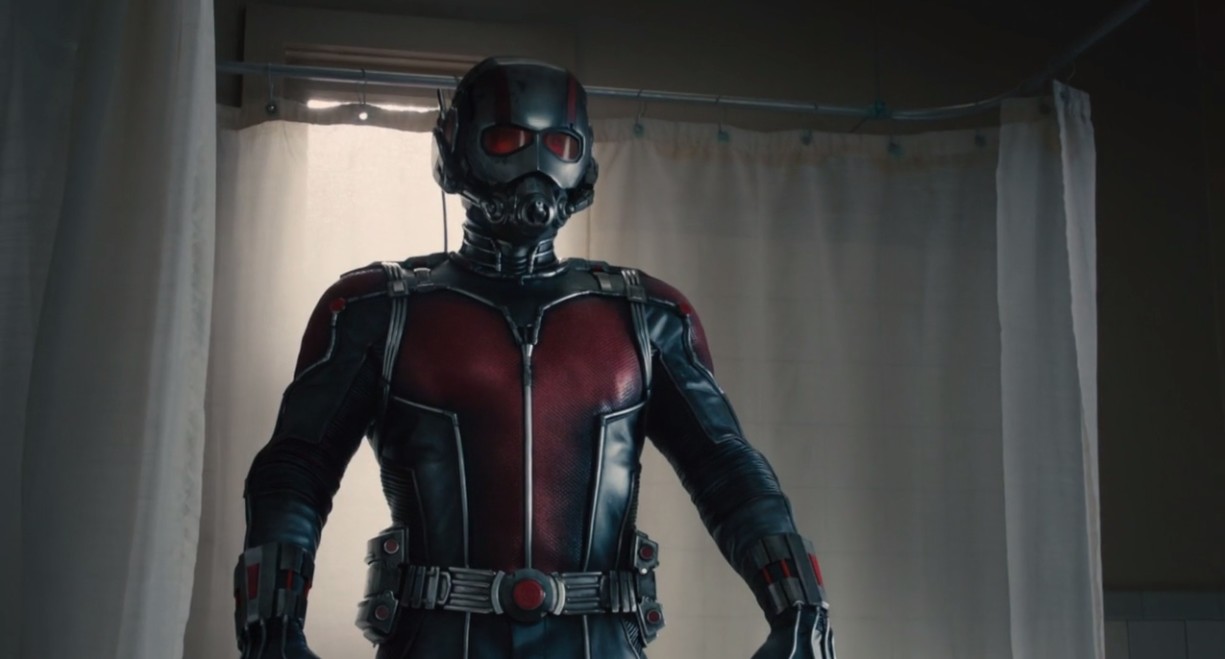 Main star Paul Rudd also deserves praise for his role as Scott Lang. The actor is best known for comedic roles like in Knocked Up and Clueless and this definitely helps in delivering quips throughout the movie but he handles the sentimental moments perfectly, very similar to Chris Pratt’s Star Lord in Guardians of the Galaxy. It’s no surprise that Rudd’s performance reminded me of Pratt as GOTG was also a film that was hyped up by many as being Marvel’s first flop before it’s release. It was absurd, it was crazy and it was bloody hilarious and proved all doubters wrong, surprising everyone and was undoubtedly one of the best films of 2014.

Michael Douglas was also fantastic as Hank Pym as was Evangeline Lilly as his daughter hope and I couldn’t flaw their chemistry as even though the whole “daughter hates her dad” cliche has been overplayed, it works well in the context of the story and explaining why Hank is no longer Ant Man. Even some of the less important characters such as Luis’ buddies Dave and Kurt, played by rapper T.I and David Dastmalchian respectively, were great additions to the cast and I’d be lying if I said I didn’t get a few chuckles from them.

Although it may have had a rocky production and the first 30 minutes of the film feel kind of slow and sluggish, the rest of the film more than makes up for it. I’ve seen the film twice already and wouldn’t hesitate to watch it again and it’s easily the best Marvel film I’ve seen all year (sorry Age of Ultron). If you haven’t seen it already then you should change that because Ant Man is in for the running for my favourite film of 2015.

So what are your thoughts on Antman? Loved it? Hated it? What was your favourite moment? Leave your thoughts in the comments below since I’d love to see what you thought of it. Also don’t forget to follow me on Twitter @blinkclyro for some more fanboying.