It’s no surprise that I’m a fan of AMC’s Breaking Bad. No show has ever had me craving for the next episode more than it did and its extraordinary story writing and character development is still unparalleled to this day . Not even Game Of Thrones, a series that I’ve started recently, has been able to knock Breaking Bad off the pedestal I’ve gave it and when I saw that Netflix were giving life to a new TV show based on Marvel’s Daredevil, my hopes weren’t high.

I was so wrong.

Instead of rambling on and on about why I love the show so much, I’ll bullet-point the 5 main reasons why the show is so great and why it’s the best thing you’ll see all year.

Confession: I had no idea who Charlie Cox was before watching Daredevil. A quick Google search came up with a career that includes such hits as Stardust and….There Be Dragons? Regardless of this, fuck me was I surprised. Every Marvel fan still feels a bit of betrayal for the 2003 Daredevil film but Cox’s portrayal of blind lawyer by day, vigilante by night Matt Murdock was more than enough to make up for it. Murdock’s life is nothing but tragedy after tragedy and it was a relief to see an actor to show this side of the character without just being mopey and miserable for the whole show.

2. A supporting cast just as strong as its protagonist. 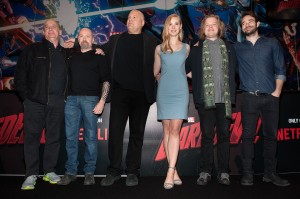 A fault that many AAA shows suffer from, I’m looking at you Dexter, is under utilising their supporting characters or making said characters dull and boring. Daredevil managed to defy this though with ease. Ask anyone who’s watched the show who their favourite character was and you’ll get a different answer. Maybe it’ll be faithful friend and lawyer Foggy Nelson, wonderfully played by Elden Henson, whose smart quips and humour perfectly contrast to Matt’s seriousness. Their friendship is one of the best things about this show and, to avoid spoilers, it comes under some extreme stress as the show goes on. If you ask me though, my favourite character had to be Kingpin. After being portrayed as an all brawns, no brain giant in the 2003 film, Vincent D’Onofrio played the character the way he should be: as smart as he is strong. His back story makes for one of the best episodes of the season and makes you as scared of him as it does make you feel sorry. 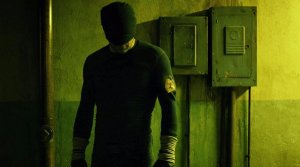 Words can’t do this justice, just click and watch this. Absolutely wonderful.

There’s no doubt that if you’re reading this then you’ve probably seen one of Marvel’s blockbuster films such as The Avengers. Their films have the trademark humour with dips and dabs of seriousness put in but Daredevil? Nuh uh. After a few episodes one thing that will be blatantly clear is how brutal this show is. Bones breaking, blood everywhere, a decapitated Russian, there’s no doubt that Daredevil’s tone is a lot different but it benefits from it. It’s not all doom and gloom though as there is moments of humour but for the most part it’s on the edge of your seat tension that will have you binging this show. 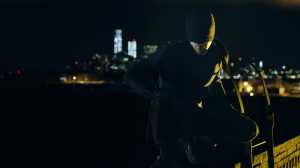 The amount of TV shows that have tried to tell grand scale stories only to get cancelled after one or two seasons are in abundance, one of my personal favourite losses being Freaks and Geeks. These abrupt cancellations result in unfinished stories that annoy fans to no end. With Daredevil it’s as if the creators took these shows into consideration when deciding what they should show in the first season. As a big comic book fan and Daredevil being one of my favourite characters, I was anxious about what they would do but I’m 100% satisfied. Developing Kingpin’s grand scheme while also focusing on Matt becoming Hell’s Kitchen saviour was done perfectly as it would be an easy mistake to just leave either story in the background. With so much left to work with (there was sly references to Bullseye and Elektra that were blink and you’ll miss it), the future looks bright for Daredevil.

So what did you think of Daredevil? Love it? Hate it? Let me know and if you haven’t given it a watch then do so now, you won’t regret it.

One thought on “Daredevil Review”