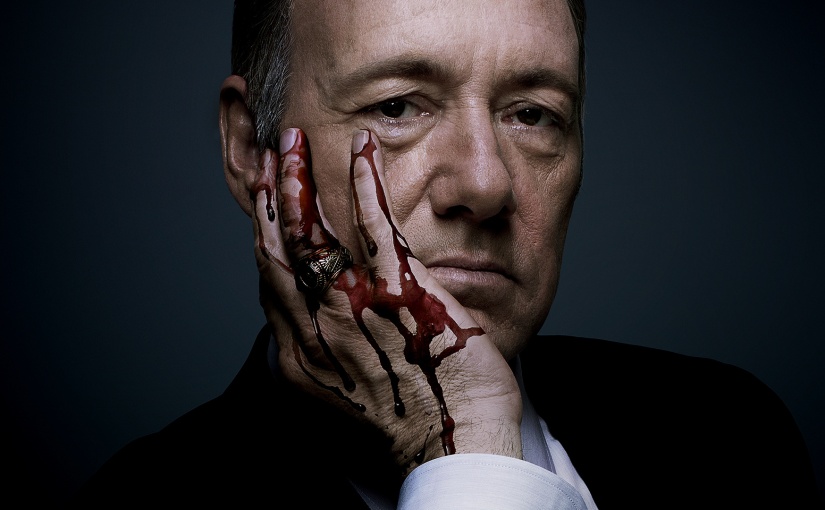 “There are two kinds of pain. The sort of pain that makes you strong. Or useless pain. The sort of pain that’s only suffering. I have no patience for useless things. Moments like this require someone who will act. To do the unpleasant thing. The necessary thing” says protagonist Frank Underwood before proceeding to break an injured dog’s neck. “There, no more pain.” And with that, House of Cards begins as it aims and succeeds to be for the entirety of its first season: a delightfully dark masterpiece.

Politics is an absolute minefield of a topic and creating a show that revolves around it can be a hard sell to many, least of all those from outside the US who may be oblivious to how it all works with words like senate and delegates being foreign to them. Thankfully, for the most part anyway, this is all window dressing for a dark and narcissistic tale where the aforementioned  Underwood  is our hero.

Or so it seems. Underwood manifests unprecedented charisma while also possessing the traits of some of literature’s most twisted beings, more specifically Shakespearean ones as he sets outs to get revenge on none other than the President with an intricate and well thought out plan which is reminiscent that of Iago.

A complex and chilling character, Underwood, played superbly by Kevin Spacey, will immediately remind anyone smart enough to watch Breaking Bad of that show’s anti-hero Walter White. Whereas we started off with Walter White as a nice natured, family man and slowly witnessed his transformation, House Of Cards lets us know from the get go that Underwood is a man out for himself, unwilling to stop for anyone and anything that prevents him from getting what he wants.

This makes the show, just like its characters, a conflicted one. The viewer will go from praising Underwood for his drive and dedication to being repulsed by his actions and his lack of empathy, usually all within the space of a few minutes. Being a Netflix show, House of Cards benefits from this as it’s immensely difficult to predict what Underwood may do next, meaning that watching”one more episode” will undoubtedly lead to you devouring the season within a day.

A show is only as strong as its characters though and thankfully House Of Cards provides more than just one interesting one. Just like Frank himself, his wife Claire is someone that yearns for power, a true Lady Macbeth figure who isn’t totally reliant on her husband for storylines. The chemistry between Claire, played by Robin Wright, and Spacey’s Underwood is magnificent and a true joy to behold, showing both respect and resentment towards one another in an almost serial killer-esque fashion.

Not only that but we’re introduced to even more characters at battle with themselves. There’s perky new journalist Zoe Barnes (Kate Mara) who walks the line between, as IGN expertly put it, becoming a shark, or simply learning to navigate the waters infested with them. U.S congressman Peter Russo also has his own battles though unlike Mara’s character, his demons lie at the bottom of a bottle, something he must deal with on his road to redemption. All of this means that there are hardly any filler scenes as each moment in an episode is as essential as the next.

As the show came out three years ago, there’s very little new insight I can give when reviewing House Of Cards but I couldn’t tear myself away from the screen whenever it was on. Full of tragedy, multiplex ties, fourth wall breaks and great cinematography (what else do you expect when David Fincher produces the show), House of Cards stands amongst some of my favourite shows with its sublime execution.

Any show that can do that is worth more than just a mention.