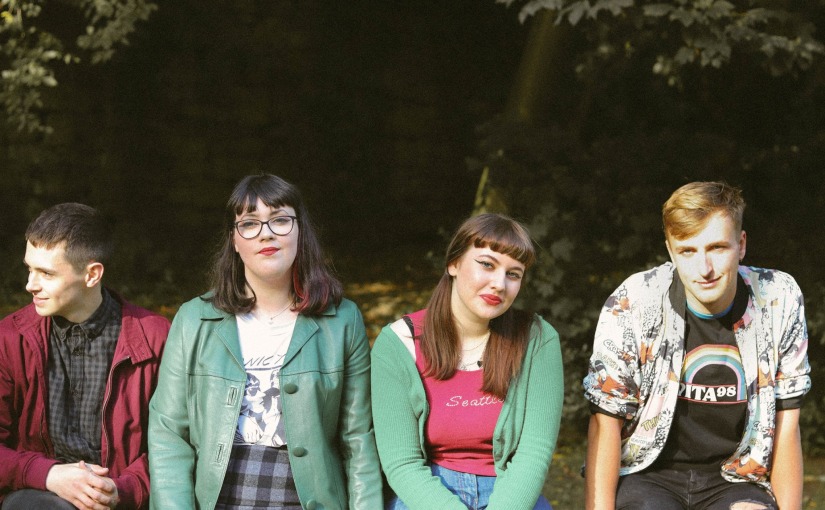 As they prepare themselves for a tour that will take them all over the prime cities to play in Scotland, there’s never a better time to sit down with Velveteen Riot than right now.

They’ve undoubtedly become more prominent over the past year, in no small part to them being brought on to support Wolf Alice in 2017 and following that up with a sturdy new EP. So before they set off to Perth in a fortnight’s time, let’s see what the band have to say as liam menzies (@blinkclyro) asks them about their career so far, what makes them stand out and much, much more.

TRANSISTOR: Your EP ‘She Rains Over Me’ dropped last month – how have you guys felt since putting it out into public? Is there anything you’ve learned from any of the feedback received?

Velveteen Riot: We were really excited with how much of a response we got with it. It got way more attention than we anticipated and people were reacting really well to it. It’s definitely the work we’re proudest of so far.

T: In your view, what makes Velveteen Riot stand out as a band?

VR: I think what makes us stand out is that we’re basically the ABBA of shoegaze. Though joking aside, we’re not trying to stand out, we’re just making music for ourselves. We started out as four strangers who met online that wanted to play music but as times gone on it’s been out friendship that has driven the band forward. We’ve become really close, Velveteen Riot wouldn’t work without all of us – we’ve not had any lineup changes because to do that would be to change the entire dynamic of us as a band. I think this is what grabs people’s attention as we’re just trying to be ourselves rather than trying to emulate anyone else.

VR: Glasgow has such a rich music scene with so many great bands and venues. Although, there can be a very cliquey nature to some of it and a lot of smaller scenes have formed within it that can be quite hard to get into if you don’t know the right people. It’s a bit like high school in a way – if you get in with the designated cool kids you’re able to get much more attention than the bands that are still starting out, or running their own gigs.

That being said, we’ve had such a great experience playing in Glasgow and have gotten to play with some great bands. We’ve all grown up listening to Glasgow bands and are incredibly proud to be one ourselves and to be a part of such an amazing music scene.

T: You got to support Wolf Alice – what was that like? Are there any other bands you guys would be keen on supporting in the near future?

VR: Wolf Alice was surreal. It’s been a year and none of us really believe it happened. They were some of the nicest people we’ve ever played with and that gig was one of the moments that made us think, “huh, people actually really like what we do”. It was a big confidence boost for us going forward and it’s given us a real determination to keep developing our sound.

The list of bands we’d love to support is endless really, of course, there’s Slowdive and My Bloody Valentine. We’re also all big fans of Sunflower Bean. Additionally, it’d be very cool to support some of the Scottish bands we grew up loving such as Franz Ferdinand, The Jesus and Mary Chain, and The Pastels.

T: Speaking of gigs, how has your experience playing live turned out? What makes a Velveteen Riot show?

VR: Lots of fun and lots of mistakes. Playing gigs is one of our favourite parts of being in a band. What makes a Velveteen Riot show for us is having a lot of fun and not taking ourselves or the show too seriously. Our confidence playing live is constantly evolving, none of us are very extroverted so it has taken some time to find our feet on stage. We aim to produce the best sound we possibly can and just enjoy ourselves. Overall, I think our authenticity and pure passion for the music is what makes a Velveteen Riot show.

VR: We’re planning a mini-tour in Autumn with a couple of our friends’ bands which we’re very hyped about, details on that will be announced very soon! We’re also are planning on recording more music and getting as much stuff out as we can before the year ends.

stream velveteen riot’s she rains over me here