Traversing across a field, making my way to the next zone with 40 people remaining, I knew something was going down. The circle was coming in by the second and I could hear bullets in every direction. With our group receiving an abundance of casualties, it was only myself and another teammate left to fend for ourselves. The bullets were coming closer and closer. Out of nowhere I was hit, but I had no clue where it came from. I frantically spun my camera in every direction possible and there it was, a muzzle flash from the roof of a nearby building: they were onto us.

Stuck in the open with only a corn field and a couple of trees for cover, panicking, I prone to increase health with bandages. My mate was languishing in a tree somewhere behind me barking out the directions of the bullets and laying down some suppression fire. My hands were sweating at this point, just waiting for my head to be blown off via a Kar98 sniper. It didn’t happen, but the waiting was terrifying to say the least.

This is exactly what you’ll get from the minute you land on the island of Player Unknowns Battlegrounds. Incredibly, the game is still in early access, which means it’s effectively incomplete, and is developed by the man that brought the battle royal mod for ARMA 3, Brendan Greene.

For those of you that aren’t aware, Battlegrounds is battle royale style shooter where players parachute onto a massive island with one objective: survive. Once players land, they must scavenge buildings on the island for a variety of different weapons that range from SMGs to Assault Rifles, Snipers, or even a cooking pan to swing in someone’s face!

You also need to get a hold of bags to carry bandages, first aid, and weapon parts. The key to success is most definitely loot and, most importantly, gun attachments such as scopes and extended mags. This will make your life a whole lot easier and gives you a much needed upper hand on opponents – this set up will no doubt be familiar to those who are fans of games such as H1Z1 or PC blockbuster ARMA 3. 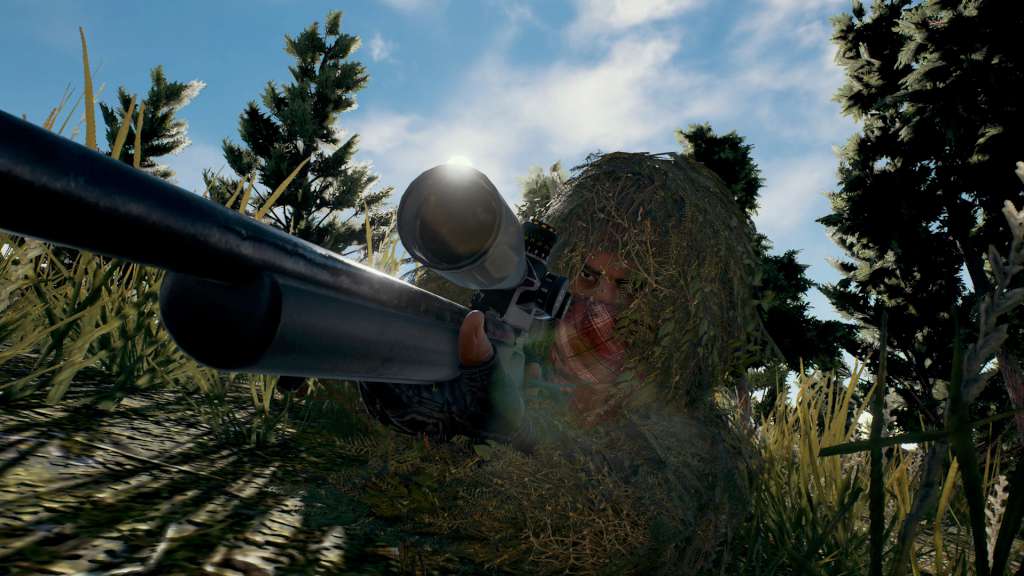 Not only do you need to contend with 99 other players in solos, but also a circle which shrinks the play zone every few minutes, and being caught outside of the ‘circle’ results in receiving health damage – think Battle Royale (or its copycat Hunger Games) and you’ll get the picture. The game itself has 3 game modes: solo, duo and squads which consists of up to 4 players per team.

Now lets get down to the nitty gritty: is the game actually any good? Well to put it bluntly, it’s great! The way it makes every second as nail biting as the last is superb. No matter where you are on the map, there’s a part of you that knows an enemy could be around the corner. This is especially the case for high loot zones as a number of players will be frantically looking for loot at the beginning of every game. If you’re too late, you’ll more than likely die a miserable death after a mere few minutes after landing. The plane itself travels in a random direction in every game, which makes most landings different most games. This helps to give each game a different feel from the last. The fact that you can choose when to parachute out of plane adds to this too.

From the off you need a plan. Jumping early to a high loot zone right below the plane will see you fighting it out with plenty of other players, but the loot is more than worth the risk if you survive. You could always jump late and travel a good distance to a quieter part of the island where you’re almost guaranteed to be on your own, however the loot won’t be great and you risk being a distance from the circle when it spawns. Weapons are distributed randomly, but a decent weapon can get you so far.

Even after nearly 90 hours of gameplay, I’ve found myself in the last 10 without even firing a single bullet. Hiding from enemy players and quietly going about your business is a valid tactic for sure. Even when your steadily progressing, you always have a choice: you can stay around the edge of the force-field and wait for its next destination or you can risk it and go straight into battle. You may also find yourself stuck in a room from time to time, anxiously waiting it out, listening to every single sound around you and, dare I say it, on the floor below you! All of these various factors keeps you entertained without the feeling of repetition.

Weapons are fun to use too, very well balanced , and you can feel a weight behind them. Also each weapon vary in rate of fire, and damage, and no 2 guns are the same.  You could go for short range guns such as the micro UZI, UMP and Shotguns to Assault rifles such as the AK or SCAR-L. Oh and don’t forgot long range guns like the Kar98 or AWM. And as said earlier each vary in damage. Damage also depends on the level of helmet equipped by the enemy. Level 1 being the weakest and level 3 being the best.

With the win percentage being so low, the hunt for victory leaves you addicted and hungry to go back. Winning a game gives you a huge satisfaction, something that is missing from so many games over the past 10 years.

The game isn’t perfect by any means: loot sometimes refuses to be picked up, annoying latency problems, and occasionally mushy textures can cause problems and prevent you from playing when in the plane or after launching out of it. Two issues which seem to have remained constant is the game not loading in time and game freezes for a small number of players. Thankfully, updates are coming out regularly which makes the £26 price tag seem worth it, especially considering most AAA publishers don’t even put this amount of effort into fixing their games’ issues.

It’s no wonder that Battlegrounds has sold a ridiculous 4 million copies since its  release on Steam 3 months ago – breathing new life into the battle royale shooter genre, Player Unknown has provided a game that is equal parts exciting and anxiety provoking. It may not be a technically perfect game, glitches are common here, but the game does enough to alleviate any issues these might bring about. Overall, Battlegrounds can stand up proudly as an example of early access done right – a rare and valuable achievement.