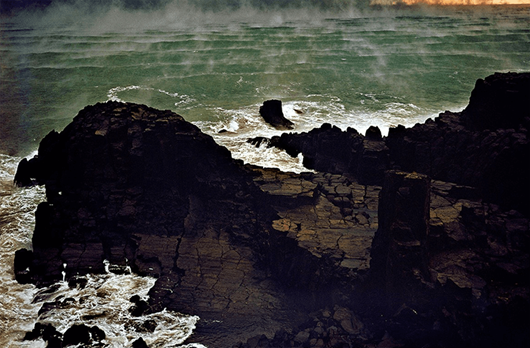 Atmospheric themes far too easily degrade into arty-farty rubbish – it takes quite a skill to keep structure and sense through an entire album; with Fleet Foxes’ new album Crack-Up, it’s a skill they just about manage.

Quite a few songs on this album start off unrecognisable from the band’s typical jingly, chorus style, instead opting for a low growling vocal and minimalist musical accompaniment. Some songs like Cassius- adopt synth sounding instruments, straying slightly from their traditional instrumental roots. Despite this stylistic evolution, their general theme is still quintessential Fleet Foxes, with novel sounds soon erupting into their recognisable style. Layers of guitar and mandolins lead by the usual drum heart-beat, alternating between a calm and storm of sound.

As in previous albums, Fleet Foxes sure do like having annoyingly long song titles. I Am All That I Need/ Arroyo Seco/ Thumbprint Scar follows the same theme as songs on their Helpless Blues LP by combining a few independent pieces into one long story series. I Am All That I Need… tells a common and relatable tale of an ending relationship. The first third reassures that I am all that I need… good to be without you but is soon cut off by the second part of the song which seems to have a more analytical view of the relationship: “So it’s true, I’ve gone too far to find you and the thumbprint scar I let define you was a myth I made you measure up to” seems to admit some fault, accepting that it was unfair to expect any person to match up so perfectly to their false image of the partner. The final part of the song tells of the oh so familiar loss and regret – “I’ll come right now, I need to see you”. I am all That I Need is honest and raw, seemingly more personal than Fleet Foxes other songs which usually act more like fable or folklore.

A stand-out from the album is Third of May/ Ōdaigahara. In the first few verses, this song has punching power and uses widely likable chord progressions which helps separate it from the often purposely challenging feel of the album. However, it’s length of almost 9 minutes will likely prevent it from becoming a popular classic. Ever so slightly reminiscent of 90’s anthem pop-rock electric guitars, thumping piano, and key choice at times, it soon dissolves again into the typical atmospheric Fleet Foxes sound.  The band seems unwilling to ever sacrifice their artistic values and allow themselves to be anything other than slightly odd. If you were to remove the typical fluctuating tempo and sudden retreat into arty themes from Third of May/ Ōdaigahara, it had the potential to be an easily accessible song to tempt in new fans. Looking at the lyrics, the song seems (perhaps unintentionally) to highlight this fear of losing their musical character, worrying – Did I change overnight?

The second half of the album returns to calm, laid back tracks with a few spluttering’s of electric instruments but in general recognisable of previous stylings, sounding like they could have been left over rejects from before. I Should See Memphis stood out a little more, though still laid-back it didn’t retire to the usual vocal tactics of fluttering tenor harmonies, instead acting more like spoken word, perhaps evocative of a softer Leonard Cohen, which works for the poetic abstract stylings of their lyrics.

Some songs like Cassius- and Naiads, Cassadies run into each other despite sounding completely different. These guys have a habit of altering the tempo and style so much during a song it’s often hard to tell if the track has moved on yet or not, which can leave the listener feeling lost. This style does however force the listener to just surrender to the album, letting the songs lead the way and the listener to simply absorb into the music. As relaxing as this style can be, it only works when listening to the album as a whole and not when on shuffle or when constantly interrupted by adverts on Spotify. The album is an odyssey and if you have the time to partake is truly wonderful, however I worry as to how individual songs will translate to casual listening.

Fleet Foxes have succeeded in creating an experimental yet still not wholly inaccessible album. Straying from their typical old reliable crutches of folk instruments and venturing further into modern realms of electric and synth while still sampling occasionally from jazz, the album is rich with tastes. Lyrics hold haunting poetic beauty which invest their listeners into discovering the true meaning behind each song. Though a few songs fade into the background as filler, there are enough unique and intriguing sounds to hold a listener’s interest.