It’s not uncommon for bands these days to have a huge change in sound from their early days, and Sheffield metal-core turned synth-rockers Bring Me The Horizon have perhaps had the biggest change over the years. Their debut EP This Is What The Edge Of Your Seat Was Made For and first album Count Your Blessings is perhaps some of the heaviest metal/death-core out there. Yet, the band progressed to the point where they’ve donned the huge, arena rock sound we adore the band for today.

BMTH’s extensive discography and change of sound throughout their career make them the perfect alternative band to critique and list the ten best tracks from the band.

A live favourite and arguably the band’s breakout track, this wee metal-core banger is recognisable by not only fans of the band, but any fan of heavy music. The opening screams of “I’ve got a secret” and subsequent lines pave the way for the tremendous breakdown that awaits listeners at the end.

The screams on this song when were frontman Oli Sykes was in his prime and it’s clear throughout. The way he utilises his voice box to effortlessly reach the high and low pitches is exceptional and any fan of the genre should appreciate the skill of Sykes.

The first song on the band’s latest album, That’s The Spirit, Doomed is an excellent example to show how the act’s music has matured since the early days. The beautifully produced track starts slow and builds up to that exceptional chorus that fans all over just love to shout along to.

The synth work by Jordan Fish really adds a different element to the track, with noises and lyrics fading in and out making Doomed a standout, utterly cinematic release. If you were to listen to this without knowing the band, you’d be baffled at the older material.

Antivist is just one of those songs that make you want to mosh and crowdsurf. Just listen to it; the built up anger on this track is apparent straight from the first line. The shouts of “Middle fingers up, if you don’t give a fuck”  are lyrics to make anyone stop, listen and subsequently lose their shit. The rebellious nature along with the harsh vocals and guitar truly sum up what BMTH stood for at this moment in time.

The closing song on That’s the Spirit, Oh No is one of those tracks that stands out as being truly unique amongst the abundance of other BMTH songs out there; tamer compared to others, but nonetheless astounding. The chorus alone makes you want to have a slow dance, and there’s no sign of mosh pits to be seen during this.

Overall, the song is a masterpiece and uses every member’s strengths to their advantage. The perfect close to a tremendous album.

Appearing on the album Sempiternal, the track is heavy yet has a softer side, no doubt due to the new additions on this record. The riff that opens the track is signature BMTH and the guitar and synth work go hand in hand, as does the drumming from Matt Nicholls which keeps the up the pace. It’s the final section of the song that makes it special – the repeated lyrics of the title with the performances behind driving it results in a sonic charged yet tense listen.

Another one from Sempiternal and perhaps the track that defines the modern BMTH sound, CYFMH is one of those songs that makes you go “wow”. The start with the huge synths, the distorted vocals, even the huge chorus and scream along moments, the song defines what this new age of BMTH was going to be like. Even live, the song is just as popular, with fans using it a cathartic method of letting loose.

The only song on this list to come from the bands’ third LP, It Never Ends is a glorious example of what the Sheffield rockers were going for on There Is A Hell. Blending the sounds of violins and cellos with metalcore seems unlikely to work, yet this song manages it. The massive bridge of Sykes screaming “every second every minute every hour every day” is enough to send shivers down your spine. Despite the track not being widely appreciated in terms of live performance, it doesn’t take anything away from the fact that it’s one of the best songs the band have ever produced

This was the second single we heard from That’s the Spirit, and boy is it a cracker. Throughout the majority of the track, we’re graced with some glitchy yet lavish electronic noises, backed up by some monumental riffs and drumming. The song as a whole is huge and made for the biggest venue possible. While some may dismiss the band’s latest album as too poppy, Throne shows that Oli and co. are more than capable of going hard when needed be.

The biggest hit from their 2013 release, Sleepwalking is an outstanding example of when electronic and metal collide for the better. The huge rock chorus blended with the screams in the verses works brilliantly. This album was the first which used the ability of Fish and it’s easy to see why he was such an influence on the band. Sleepwalking is one of those songs that when you hear it, you couldn’t mistake it for anything other than a Bring Me The Horizon tune. Absolute belter.

A controversial choice but this is arguably the pinnacle of BMTH’s attempt to balance their harsh origins, synthy rebirth and pop-friendly attitude. The isolated vocals, which are more in turn with the singing Sykes wanted to go with on this project, smack delightfully into a rip-roaring clash of chilling violins and guitars.

Live, this song is beautiful as it really does exemplify the versatility and talent of the band, something that can be seen on the faces of everyone in attendance as they, once again, cavort and kick off. True Friends is the manifestation of elements that any Bring Me The Horizon fan will adore, and it’s why it’s the top pick for this list. 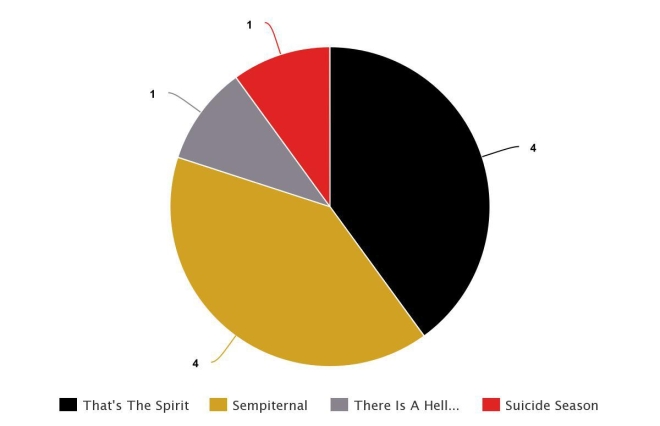 →check out the tracks above in this handy playlist←